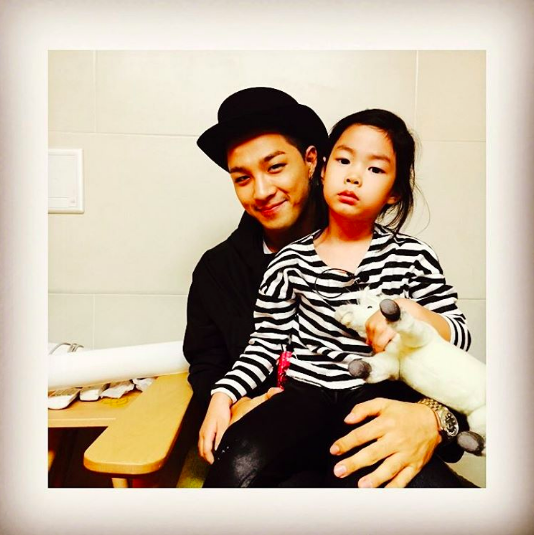 BIGBANG member Taeyang has shared a cute throwback photo with his friend Haru, also known as the daughter of Epik High’s Tablo!

On July 12, Taeyang shared a sweet photo to Instagram of himself smiling with Haru, who’s siting on his lap while holding a stuffed unicorn toy that Taeyang gave her.

The photo is from the filming of an episode of “The Return of Superman,” when viewers got to see Taeyang and Haru hang out together, Tablo revealed that Taeyang is a huge fan of Haru, and we saw Taeyang gifting her with the stuffed unicorn.

Around the same time as Taeyang posted the photo to Instagram, Tablo tweeted a link to the music video for their cover project of Taeyang’s hit song “Eyes, Nose, Lips,” and encouraged everyone to go to both Epik High’s upcoming concert and BIGBANG’s 10th anniversary concert. Back in 2014, Taeyang shared a video of Haru’s own cover of this song, which is definitely worth a listen too.

Tablo also sent an “I love you” tweet to Taeyang, who replied with “It’s a hit. A hit!” with heart emojis. Tablo shot back in reply, “My heart’s racing.”

Epik High will soon be holding their series of small-venue “Now Playing 2016” concerts starting later this month, while BIGBANG is gearing up for their 10th anniversary concert in August.

Update: This article has been corrected to reflect that this is an old photograph. Hopefully the pair get to reunite soon!

Epik High
BIGBANG
The Return of Superman
Haru
Tablo
Taeyang
How does this article make you feel?