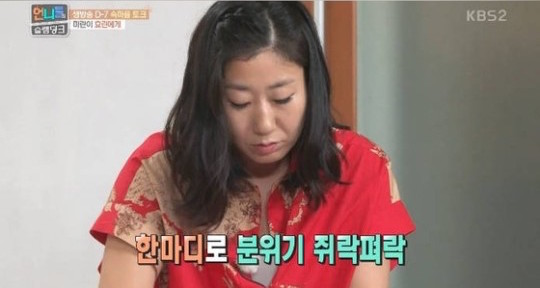 Min Hyo Rin might have felt like she was being a burden due to her girl group aspirations, but Ra Mi Ran is sure to let her know that guilt isn’t necessary.

During the July 15 episode of KBS2’s “Sister’s Slam Dunk,” the cast members are asked to give massages to each other, while revealing their inner thoughts and concerns.

This episode takes a small trip back in time, as it is set approximately seven days before their project girl group Unnies debuted on “Music Bank.”

Ra Mi Ran first calls Min Hyo Rin to the table so she can give her a massage, and makes sure to add humor by acting like a real masseuse. They continue the act for a little longer, before the older actress starts candidly talking to her junior. 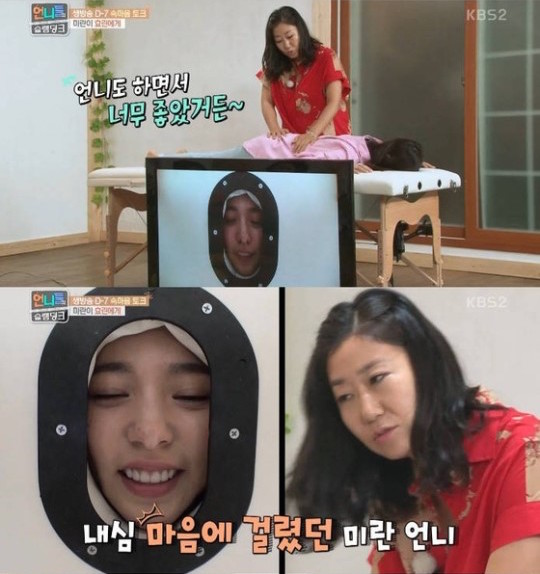 Ra Mi Ran straightforwardly reveals, “My heart hurts seeing Hyo Rin constantly feeling sorry towards us and seem like she’s walking on eggshells around us. It just feels like you’re becoming more timid and shying away, so I was worried. We’re not going to be as apologetic when chasing our dreams,” and reassures her that she doesn’t need to feel like she’s a burden.

The actress is referring to how Unnies was formed in order to fulfill Min Hyo Rin’s past goal of wanting to become a girl group member, as the premise of this show is to provide the opportunity to the cast members to chase their forgotten dreams.

Ra Mi Ran continues, “You’re doing well and this will become a good memory because you allowed us participate in such a fun dream,” and reiterates that she personally is having a good time preparing for Unnies because she wanted to be a singer for a short while when she was younger as well.

Meanwhile, don’t miss out on the whole episode below!