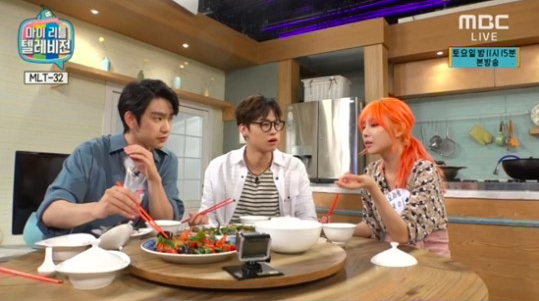 On July 17, miss A’s Fei appeared as one of the guests on “My Little Television.” In the episode, she put her cooking skills to the test alongside Kim Gura, athlete Park Ji Woo, Bada, and the band Gukkasten.

Fei also invited her fellow JYPE labelmates, GOT7’s JB and Junior, to taste her cooking. However, the two of them were brutally honest in their judgments.

“It’s too spicy,” Junior said about her clam stir-fry. “Rather than tasting the clams, the red peppers are overpowering.”

Later in the episode, JB shared, “GOT7 almost never cooks in the dorm. But Bambam is pretty good at cooking. I only know how to to make stir-fried rice and kimchi stew. Everyone else is about the same.”

The two of them also leave the broadcast rather abruptly, taking Fei by surprise again. “I’m alone again,” she said, before taking on her next challenge.

Fei is set to make her solo debut on July 21.

GOT7
My Little Television
Junior
Fei
JB
How does this article make you feel?