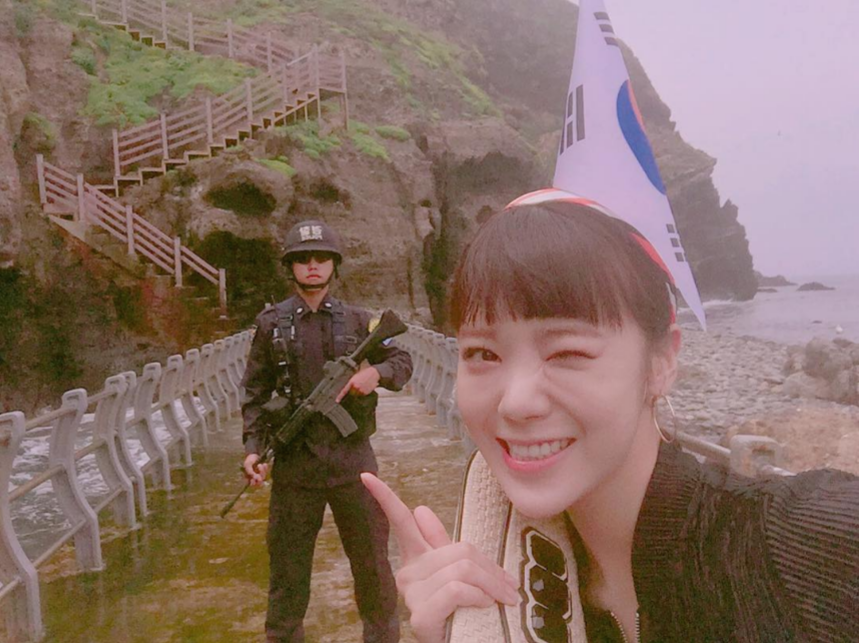 After School’s Lizzy recent trip to Dokdo (also known as Liancourt Rocks), the subject of a long, ongoing territorial debate between Japan and South Korea, has received negative response from her Japanese fans.

On July 18, Lizzy posted on her Instagram, “Will I be able to enter Dokdo, where people say three generations of your family must be virtuous before allowed entry?,” along with a photo of her ticket and a small South Korean flag.

Approximately two hours later, she updated her fans that she successfully arrived on the island, with a series of photos taken on the island.

In one particular photo, she stands shoulder-to-shoulder with South Korea’s Dokdo Guards, along with a caption that says, “Dokdo is our land. Thank you. I feel reassured.”

However, many Japanese fans reacted negatively to her post, and expressed their extreme dissatisfaction at Lizzy’s posts.

Many of the comments on her photos say things like, “Don’t come to Japan ever again,” and “We request that the Ministry of Foreign Affairs takes measures to bar you from entering [Japan].”

This is not the first time Japanese people have reacted negatively to a South Korean celebrity’s support for Dokdo. In 2012, actor Song Il Gook was physically barred from entering the country until further notice by the Japanese government for participating in a event where he swam to Dokdo on August 15, 2012, which marks the anniversary of Korea’s liberation from imperial Japan.

Singer Lee Seung Chul was also forced to return to Korea while trying to enter Japan on a trip in 2014. While there was no official statement given on why this decision was cast, many speculated it was due to the singer’s concerts held in Dokdo earlier that year.

Meanwhile, it is reported that Lizzy safely returned to nearby Ulleungdo by boat after an extremely brief stay on Dokdo in accordance with a pre-determined schedule.

After School
Park Soo Young
How does this article make you feel?