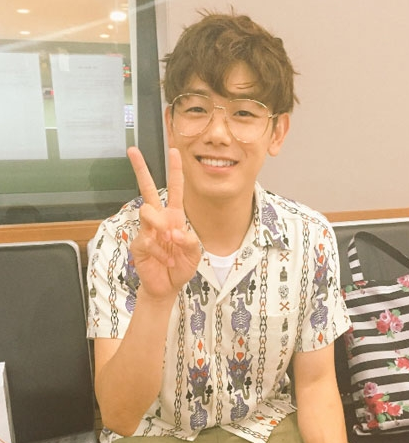 Eric Nam recently shared his honest thoughts on his “We Got Married” partner, MAMAMOO’s Solar.

The singer was a guest on MBC Radio’s “Park Kyung Lim’s 2 O’Clock Date” on July 19, where he showed off his delightful way of speaking.

When asked the question, “Would you ever lose to your girlfriend?” Eric Nam responded, “I think I’m losing.” DJ Park Kyung Lim then mentioned his victory in the swimming contest against his on-screen wife, to which he responded, “Before the match, I had lost several times. Still I wanted the prize of getting my wish granted so much, which is why I tried my best.”

Eric Nam also talked about how he used this wish to ask Solar to speak informally with him. “She would mix formal and informal speech, but when she spoke formally I thought, ‘Do I make her feel uncomfortable?’ So I asked her to speak informally in hopes that she would become more at ease around me. Right now it feels more comfortable,” he explained.

When asked about his “We Got Married” wife he said, “It’s really wonderful. Yong Sun (Solar’s real name) has so much talent and she’s really an amazing friend. In the beginning it was really awkward, but as time went on she took care of me. It feels like she is actually becoming my wife. She’s becoming more like my ideal type.”

Eric Nam
Park Kyung Lim's 2 o'clock Date
Solar
We Got Married
How does this article make you feel?