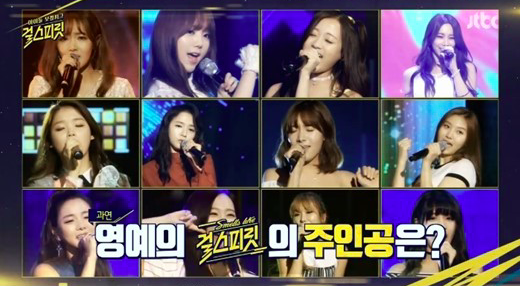 JTBC’s new variety program “Girl Spirit” has finally made its debut! The show, which aims to showcase the talents of girl group members who have not yet hit it big, aired its first episode on July 19.

Emceed by Jo Se Ho and INFINITE’s Sunggyu, the twelve contestants first gave a performance with their group before starting their solo stage. They also talked about the hardships of an idol career.

“We debuted around the same time as EXID and AOA, but our public recognition is low,” FIESTAR’s Hyemi said. “In fact, it’s almost non-existent. We haven’t had a single hit song in four years. We want to show people more of us, but it’s frustrating.”

Sojung of Ladies’ Code said, “There are so many people who cheer us on. People tell us that they want us to succeed. But that actually creates more pressure on us to do well.”

After all twelve contestants gave their performance, they were judged through votes. After the first and second round votes were added together, Oh My Girl’s Seunghee took first place and SPICA’s Bohyung took second.

You can watch the rest of the performances below!

Oh My Girl
Ladies' Code
Girl Spirit
SPICA
FIESTAR
How does this article make you feel?