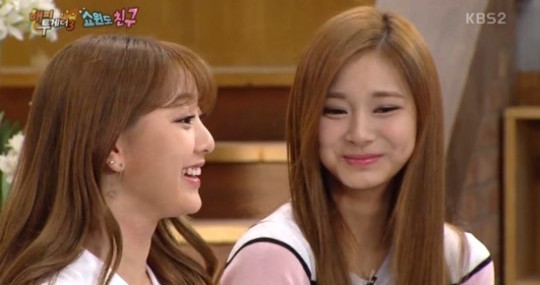 On the July 21 episode of KBS 2TV program “Happy Together 3,” TWICE’s Jihyo and Tzuyu appear as guests.

While on the show, Jihyo talks about Tzuyu’s inability to hide her true feelings. “She makes it so that you’re left speechless,” Jihyo says. “She’s really bad at lying.”

She struggles to let the words out, but she says Yoo Jae Suk and Jeon Hyun Moo are handsome. However, when it’s Park Myung Soo’s turn, Tzuyu says instead, “He has his individual charm.”

The MCs erupt in laughter, and Jeon Hyun Moo says, “She just couldn’t bring herself to do it.”