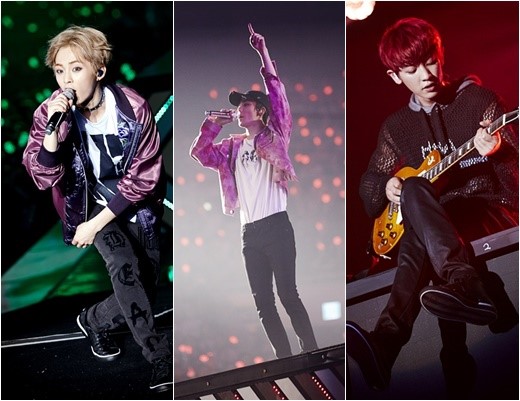 EXO’s Xiumin, Chanyeol, and Sehun have performed as a trio for a new song at their latest concert series, prompting fans’s curiosity about the possibility of them forming the boy group’s first unit.

EXO has been holding their third concert series, “EXO Planet #3 – The EXO’rDium,” at the Olympic Gymnastics Arena in Seoul, with the most recent show on July 24.

During the concert, a video is played of members Chanyeol and Sehun performing an unreleased song called “Do It Together,” hyping up fans with their powerful rapping and captivating performance. The video also includes a jaw-dropping dance performance from members Kai, Lay, and Sehun.

Later on in the show, Xiumin joins Chanyeol and Sehun to perform “Do It Together” onstage, raising curiosity about whether they will be officially promoting the song as a trio.

Meanwhile, the boy group’s third concert tour will continue on July 29 to 31. After holding concerts from July 22 until July 24, EXO is establishing a record as the first artist to hold as many as six concert nights at the Olympic Gymnastics Arena.

Do you think Xiumin, Chanyeol, and Sehun should promote as a sub-unit?

Support the artist by buying EX'ACT from YesAsia
EXO
Xiumin
Sehun
Chanyeol
How does this article make you feel?