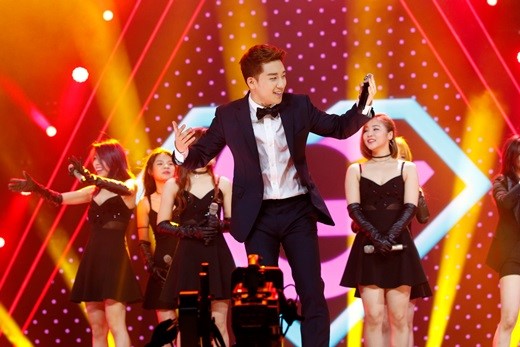 BIGBANG’s Seungri has proven his prowess as a producer, with his song taking the number one spot on the QQ Music Chart in China.

Seungri has been a mentor on the Chinese audition show “Girls Fighting” on Dragon TV and for the recent episode that aired on July 23, he performed his self-produced track “36 Tricks of Love” with the contestants as the opening stage for the show. The song soon topped the chart after its premiere.

The song “36 Tricks of Love” was originally made by popular Taiwanese singer Jolin Tsai and was rearranged by Seungri. The episode showed him working hard with his mentees as they prepared for the opening stage. Not only was the performance a success but once the song was released on July 24, it immediately hit the top of the QQ Music Chart in China. Moreover, he trended the top of the charts on Weibo as well, with “Girls Fighting” taking the number one spot and “Seungri 36 Tricks of Love” taking the third spot.

After his song hit the number one position, Seungri took to both his Instagram and Weibo to write a message to his fans. On Weibo, he wrote, “After waking up, I saw that my first Chinese song took number one on the music charts. The power of the Chinese fans is really amazing and I’m so thankful. I will continue to work hard and show great stages and songs.”

#QQmusic popular song’s chart Rank . No1 ? my first Chinese song! ’36 tricks of love’ thank u so much plz check it out on QQ music now !

Check out the performance of the song below!

BIGBANG
Seungri
Girls Fighting
How does this article make you feel?