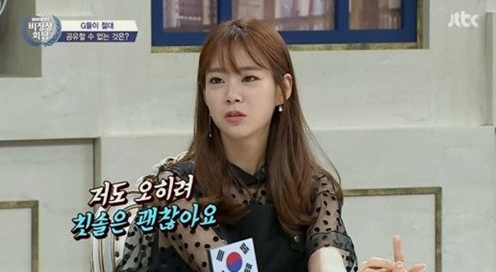 On a recent episode of “Abnormal Summit,” former KARA member Han Seung Yeon and actress Han Ye Ri revealed that they wouldn’t mind sharing a toothbrush with a boyfriend.

The topic arose as they discussed the main question “Is it abnormal for people to think that living with others is uncomfortable?” During the conversation, the actresses discussed what the limit would be in terms of sharing items with a boyfriend or a friend.

The MCs then asked if they would hypothetically be willing to share a toothbrush with a boyfriend. Both ladies willingly responded, “I think sharing those things is possible.”

When asked, “Then what are some things that can’t be shared?” Han Seung Yeon replied that she couldn’t share expensive items. “There was a time when I let a friend borrow an expensive camera, but she accidentally fell backwards and caused the camera to shatter,” she said. Han Seung Yeon added, “When I asked about compensation, the friend asked me why I was asking about compensation and not if she was hurt.”

The actress proceeded to talk about not being able to receive compensation when her car bumper was damaged. “Whenever something happens, I can’t ask for compensation, so from the beginning I don’t let people borrow stuff.”

Be sure to catch the episode of Abnormal Summit featuring Han Seung Yeon and Han Ye Ri!