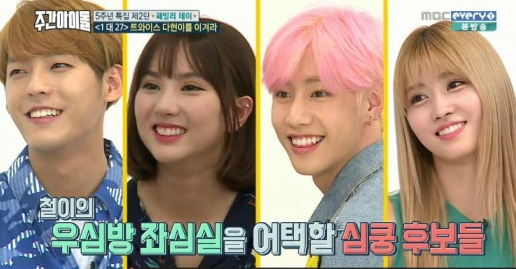 Kim Heechul found himself as quite the lucky guy as four idol stars engaged in a friendly competition to capture his heart.

On the July 27 episode of MBC every1’s “Weekly Idol,” in commemoration of the show’s fifth anniversary, it invited four of the hottest idol groups out today, with GOT7, TWICE, BTOB, and GFRIEND as the guests for the special episode.

One of the corners on the show is “One Against 27,” in which the groups compete against each other in various challenges, such as doing their choreography at double speed and engaging in an ugly dance battle.

Another challenge is to raise Kim Heechul’s heart rate, a challenge that was previously accomplished by Dahyun of TWICE. The competitors are GFRIEND’s Eunha, TWICE’s Momo, GOT7’s Mark, and BTOB’s Minhyuk.

Kim Heechul gets nervous for his next competitor, GOT7’s Mark. Mark hides his face in his jacket and peeks out at Kim Heechul, whose heart rate rises up briefly but falls to 117.

Lastly, BTOB’s Minhyuk proves to be a worthy competitor for Kim Heechul’s heart, as he quietly comes up and has him feel his own heart rate. He even gives him a back hug, which quickly raises Kim Heechul’s heart rate but ultimately is not able to beat the 136 that was achieved by TWICE’s Momo.

Watch the competition below!