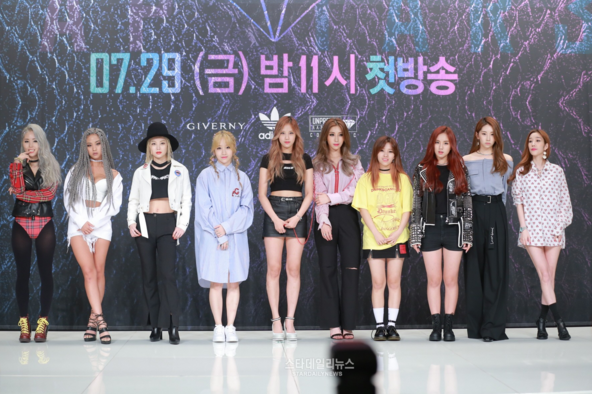 On July 29, “Unpretty Rapstar 3” had an official press release, where all 10 contestants of the show were present. The contestants and the show’s producers talked about the upcoming program.

“There are a lot of people wondering if there will be another character like Jessi on the show, but we don’t think people should expect that. But each contestant on the show has their own personality,” continued the CP.

Yuk Ji Dam commented on her appearance on the show, having appeared in a previous season. “I feel like viewers are getting bored of me so I wanted to show them a different kind of image. That’s why I’m working much harder than the others,” said the rapper.

Former Jewelry member Ha Joo Yeon also shared how she felt saying, “I’m happy to show people the regular me instead of ‘Jewelry’s Ha Joo Yeon.’ The members of Jewelry gave me lots of encouragement.”

In the first episode, rappers will be pitted against each other in a 1 vs. 1 battle, with a total of five rounds. Pairs include Giant Pink vs. Kassy, Miryo vs. Nada, Janey vs. Yuna Kim, Jeon Soyeon vs. Ha Joo Yeon, and Yuk Ji Dam vs. Grace.