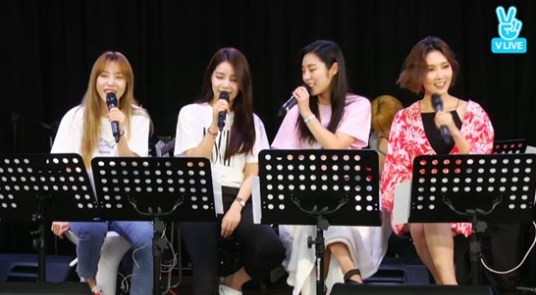 MAMAMOO has given fans a quick preview of their upcoming concert “MOOSICAL,” sharing new details and raising the anticipation for their very first concert.

On the broadcast, the members share what they’re feeling as the concert date draws nearer. Wheein says, “It’s exciting and happy and overwhelming.” Solar and Hwasa share similar sentiments. Solar says, “I want it to be as moving of an experience as a musical,” and Hwasa agrees, “We will completely fill the stage [with our performances].”

MAMAMOO reveals they will have solo stages that will be able to portray each member’s individual characteristics. Solar shares some of their plans as she elaborates, “For this concert, our company and we ourselves are giving our all to prepare for it. We are also preparing an incredible new song. You will also be able to hear Wheein’s first self-composed song as well.”

MAMAMOO’s first solo concert will be held from August 13 to 14 at the Olympic Hall in the Seoul Olympic Park.

Support the artist by buying Melting from YesAsia
MAMAMOO
Solar
Hwasa
Wheein
How does this article make you feel?