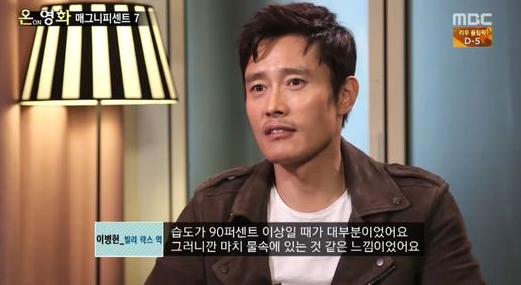 Actor Lee Byung Hun met with reporters and talked about the difficult conditions under which he filmed the upcoming Hollywood movie “Magnificent Seven,” which also stars Denzel Washington, Chris Pratt, and Ethan Hawke.

“The Magnificent Seven” is a remake of the classic 1960 western film of the same name. It is a story of seven gunslingers who are hired to protect a village from bandits.

Lee Byung Hun shares, “The temperature would be 40 degrees Celsius [104 degrees Fahrenheit], sometimes 41 degrees and the humidity would be at 90 percent. It felt like I was underwater.”

He continues, “There was even a time when a stunt man got dehydrated and had to be taken to the hospital in an ambulance.”

Check out the trailer for the movie below!

The Magnificent Seven
Lee Byung Hun
How does this article make you feel?