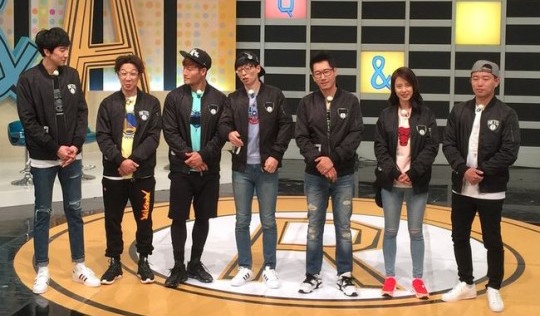 The new producing director (PD) of the hit SBS variety show “Running Man” met with reporters and talked about his vision for the show after he takes the helm.

Kim Joo Hyung became the main PD of “Running Man” on July 3, while the previous PD Im Hyung Taek left to lead the Chinese version of the show. For the past four months, a team of three PDs worked together as the leads for the show, but Kim Joo Hyung is now the solo main PD.

Fans of the show will recognize Kim Joo Hyung. He has had many appearances on the show and has a nickname as “Myuk PD” (or “collarbone PD”), for being the PD that the members would jokingly choke in frustration.

Kim Joo Hyung talks about the longevity of the show, saying, “There are limitations to a game variety show but there are also strengths in how long-running it has been.”

When asked what he thinks is the strength of the show, he mentions, “The members. Since the show has been on for a long time, the members have great chemistry.”

He continues, “It’s a game variety show and the members have their own characters and that’s where the strength of the show comes out. Their relationships have been built over a long time and instead of being exhausted, the relationships have been maturing even more. Given our format, we have to have guests but since the members are our strengths, we are able to show that off nonetheless.”

Another vital aspect of the show is the classic name tag game, in which members rip off each other’s name tags in a fast paced game of tag. Kim Joo Hyung says, “Since we’ve played the game for such a long time, we’re not going to play it exactly the same way. Of course we should continue to feature the game since it is something that we have developed through our show. Although we can’t say if we will frequently feature the game or not, I can say that we are not purposely not playing the game.”

He concludes, “Just as how we’ve been doing well all this time, we’re going to concentrate and work on finding a larger frame to fit our show into.”

Catch the latest episode of the popular show on Viki below!