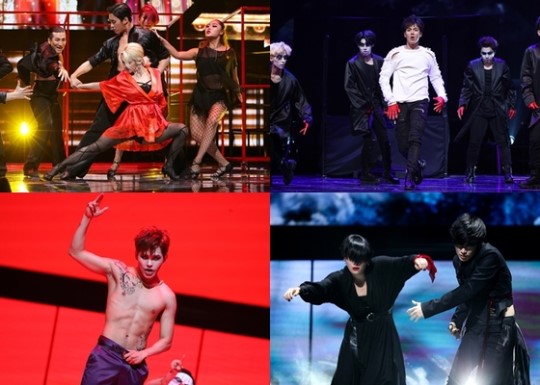 Are you ready for more performances by some of the best dancers in K-Pop?

On August 3, Mnet’s new celebrity dance show “Hit the Stage” aired its second episode, which is part two of its first competition, in which each contestant has been tasked with performing a dance that fits the theme of “Devils.”

Last week’s episode featured the first half of this round’s performances by NCT’s Ten, SISTAR’s Bora, TWICE’s Momo, and Block B’s U-Kwon. U-Kwon is in the lead going into the second half, as he took the highest score for his performance as Joker, receiving 158 points.

Girls’ Generation’s Hyoyeon and the crew Jenny is up first in this episode, with Hyoyeon transforming into a seductive femme fatale for her dance to the song “Cell Block Tango” from the “Chicago” soundtrack. Hyoyeon is given a score of 152.

MONSTA X’s Shownu and the crew D.Q go next to perform with a frightening monster concept. He grabs 149 points for his performance.

Next up is INFINITE’s Hoya and the crew Avengers. He also takes to the stage as Joker, although with a very different style of performance compared to U-Kwon. Hoya ends up receiving 159 points, putting him in first place so far.

Last up to perform is SHINee’s Taemin along with Japanese choreographer Koharu Sugawara. He dances in all black as someone who is battling with his own inner demons, performing to his song “Goodbye,” which is a recently released Korean version of his hit Japanese track “Sayonara Hitori.”

Taemin takes the win with 189 points, which is a jaw-dropping 30 points more than runner-up Hoya’s score of 159.

The video below on Naver TVCast is a full version, but will be region blocked for readers in many areas.

Which performance from these two weeks do you think was the best?