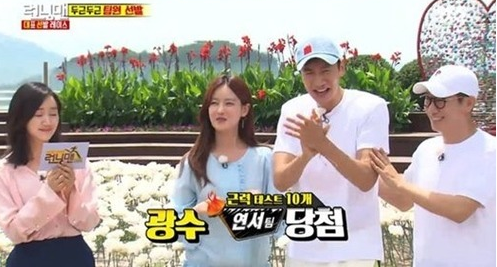 On August 2, Oh Yeon Seo met with reporters about her role in the upcoming movie “Take Off 2” and during the interviews, she was also able to talk about her experience on the popular SBS variety show.

On the show, she mentioned that more than winning, she was more concerned about her screen time and after being teamed up with Yoo Jae Suk, Lee Kwang Soo, Ji Suk Jin and Song Ji Hyo, she showed off her fun spirit as she participated in the challenges.

She shares, “Variety shows are so hard. The cast is really amazing. Even during the filming, I asked Song Ji Hyo, ‘Is it always this hard?’ and she said ‘Today is a bit more difficult.’ I realized it must be so difficult physically. Actually, I can’t ride rollercoasters that well and so just riding it in general was really stressful for me. I just wanted to have fun.”

This episode marked her second time guesting on the show. When asked how the cast members were this time around, she responds, “The oppas are really a bunch of scaredy cats,” as she brings up Ji Suk Jin and Yoo Jae Suk.

She laughs as she continues, “The three male members on my team really don’t have any different consideration for actresses. I actually wasn’t sure if I would be able to ride the rollercoaster at all. I was surprised when the mission was announced. I was really worried about riding them. But regardless of whether it was variety or comedy, I just wanted to have fun. I like fun people.”

The movie “Take Off 2” is about an eclectic group of women, including a North Korean defector, a banned short track skater, a middle aged woman, and a middle school student, who band together to form the first South Korean women’s national ice hockey team.

The movie is set to premiere on August 10.

Check out the hilarious episode of “Running Man” on Viki below!

Take Off 2
Running Man
Oh Yeon Seo
How does this article make you feel?