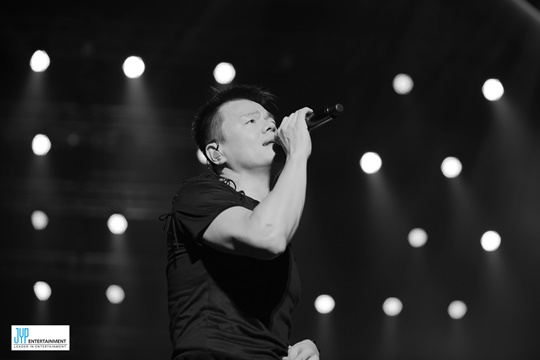 Park Jin Young returned to his roots and stood on stage as a singer and not just as the head of his company, JYP Entertainment.

Singers from the label, including Wonder Girls, 2PM, Jo Kwon, Min, Fei, Baek A Yeon, Park Jimin, GOT7, Bernard Park, G.Soul, DAY6, and TWICE, all came together to fill the stage with great performances.

Park Jin Young gave a passionate duet performance of “I Have A Girlfriend” with G.Soul. He then talked with the fans, explaining, “This has just been an appetizer of what’s to come. Now the real performances will start. If we just did solo performances, we’d just sing our two songs and go but we wanted to give you all a more well-rounded stage. So, we will all swap songs and show you a better performance. At least for today, don’t look at me as the head of JYP but as a singer under the label JYP.”

To roaring cheers, he continues, revealing, “I want to be a singer until I am 60 years old. I guess when I’m at that age, TWICE will be 40 years old.”

The “2016 JYP Mix & Match” concert is the first collaborative concert of JYP artists that they’ve had in two years, and is the fourth one they’ve held so far.

Park Jin Young
JYP Nation
How does this article make you feel?