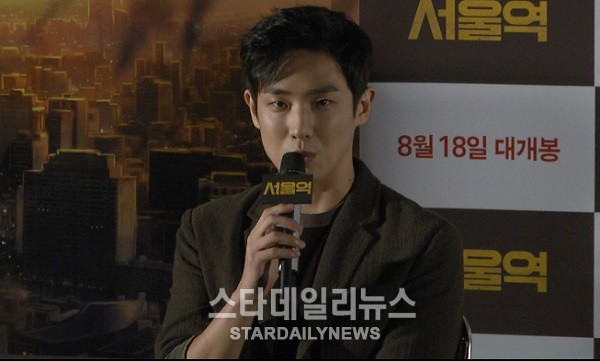 Lee Joon Shares His Dream Of Playing A Zombie Role

On August 10, Lee Joon attended the press conference for the animated film “Seoul Station,” which is the prequel to “Train To Busan,” and talked about his desires to act as a zombie.

During the event, Lee Joon says with a laugh, “I saw ‘Train To Busan’ and tried acting like a zombie. I can bend my body well, too.” He adds, “Actress Shim Eun Kyung did such a great job as a zombie and it made me envy her. I can bend my joints well, too. If I get the chance, I want to try [acting as a zombie].”

He shares how he felt lending his voice to the animated “Seoul Station,” saying, “When I voiced an animation last time, I had to focus on syncing my mouth shape with the animation. For this film, however, there were only sketches and I just had to act with my voice so it was more comfortable. I didn’t feel like I was working. The director was very passionate and matched well with me, so I played around as I acted.”

“Seoul Station” focuses on an unknown virus that spreads in Seoul Station and the people who struggle to stay alive. Actors Ryu Seung Ryong, Shim Eun Kyung, and Lee Joon have lent their voices to the film.

“Seoul Station” will premiere on August 18.