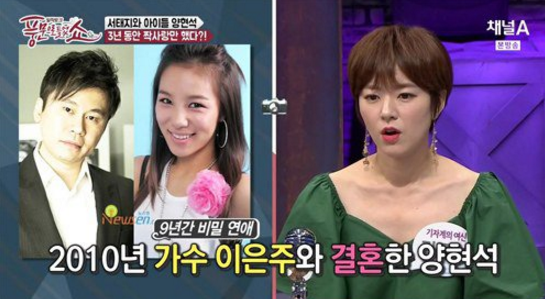 On a recent episode of Channel A’s “Rumor Has It,” an article about former Seo Taiji and Boys member Yang Hyun Suk came into discussion. The article was titled, “In 2010, after nine years of secretly dating, Yang Hyun Suk is getting married to Lee Eun Joo.”

The article revealed, “Lee Eun Joo gained recognition for being a former member of girl group Sweetie, and was also known for being the younger sister of Sechskies’s member Lee Jae Jin. She is twelve years younger than Yang Hyun Suk.”

In response to the article, panelist Choi Dae Woong commented, “Yang Hyun Suk appeared on SBS’s ‘Healing Camp,’ where he talked about his love story with Lee Eun Joo. But the truth is that he knew her since her training days, and had liked her then as well. After having a one-sided crush on her for three years, he confessed his feelings through a phone call.”

Yang Hyun Suk
How does this article make you feel?