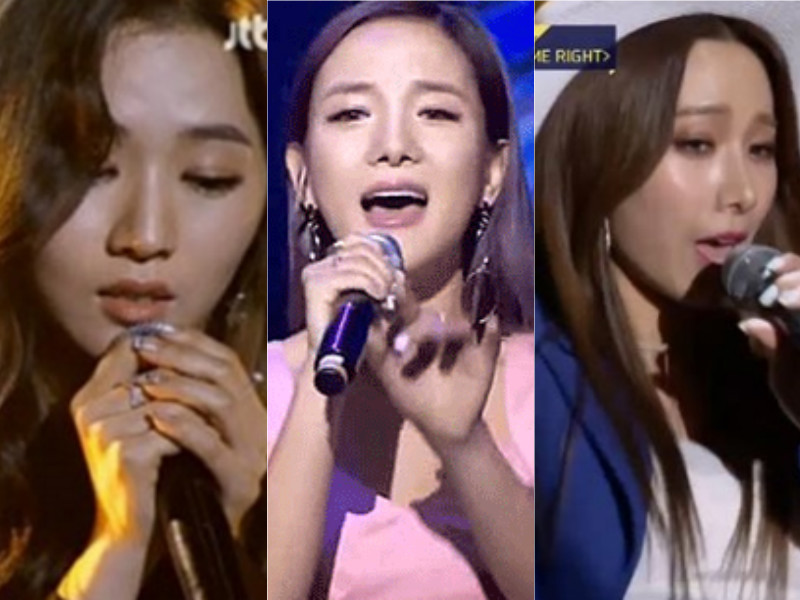 The August 16 episode of JTBC’s “Girl Spirit” continues the battle featuring hit songs from the first half of 2016.

First up was Spica’s Bohyung with her rendition of Baek Ye Rin’s “Across the Universe” featuring rapper Flowsik.

Seo In Young complimented Bohyung on her expert singing and said she should be able to succeed as a solo singer as well. Bohyung received 104 points.

LABOUM’s Soyeon was next with her performance of Hyukoh’s “WI ING WI ING.” She captured the audience’s attention with her funky dance arrangement of the song.

Lee Ji Hye commented that she preferred Soyeon’s version of the song more than the original. However, Soyeon ended up receiving 63 points.

Following that, BESTie’s UJi performed her version of EXO’s “Love Me Right.” She filled the stage with her energy and powerful singing.

While Lee Ji Hye complimented her vocals, Seo In Young remarked that she enjoyed the stage but it was a bit typical. UJi moved to first place with 108 votes.

April’s Jinsol showed a different side of herself with her mature performance of Crush’s “Woo Ah.”

Last but not least was Ladies’ Code’s Sojung and her moving performance of Urban Zakapa’s “I Don’t Love You.”

The panel had great praise for the singer and commented that they could truly feel loneliness and sadness through her singing. She ended up with 107 votes, just one point shy of UJi’s score.

Following the performances, the first and second rounds of voting were combined to reveal the ultimate winner. Sojung ended up winning first place for the first time while UJi and Bohyung both came in second place respectively.