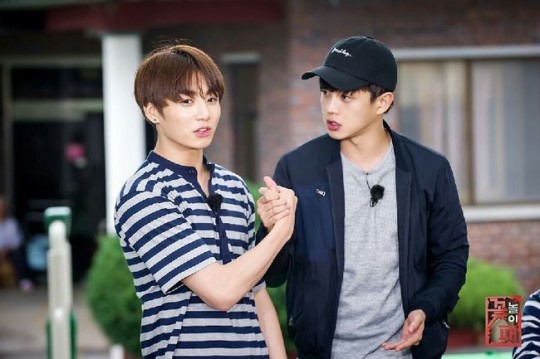 On August 19, a source spoke with Ilgan Sports and revealed that BTS’s Jungkook and Kim Min Suk will be leaving SBS’s “Flower Crew.”

The two were a part of the pilot when “Flower Crew” started airing through Naver’s V App. The show later got broadcasted as a regular variety show through SBS and it looks like the pair will no longer be a part of the fixed cast.

Both Jungkook and Kim Min Suk were also a part of the popular “Celebrity Bromance” series, so many fans are upset about them leaving “Flower Crew.”

“Flower Crew” is a travel variety show that featured six cast members traveling and having their fates determined by live votes. While Jungkook and Kim Min Suk are leaving, the other cast members (Seo Jang Hoon, Ahn Jung Hwan, Jo Se Ho, and Yoo Byung Jae) will remain on the show.”

The first episode filmed after becoming a part of SBS’s regular programming will air on August 29 at 11 p.m. KST.

BTS
Jungkook
Kim Min Seok
How does this article make you feel?