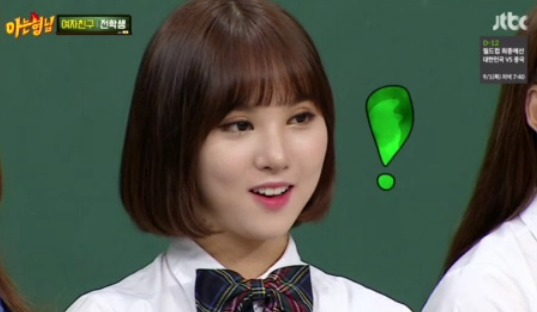 Who Does GFRIEND’s Eunha Pick Between Min Kyung Hoon And Kim Heechul?

GFRIEND member Eunha proves to be quite popular as she receives love calls from two cast members on “Ask Us Anything!”

On August 20, GFRIEND appears as a guest. During the show, the members are asked which cast members would make good boyfriend material. They are also asked to choose a cast member that is closest to their ideal type.

When it comes to Eunha’s turn, however, she is interrupted and surprised by Min Kyung Hoon who says, “She’s most like my style.”

Kim Heechul doesn’t lose and immediately says, “I can’t help myself. I like Eunha too,” and the two engage in a fight over the GFRIEND member.

But in the end, Eunha does not pick either one of them, and instead picks Kang Ho Dong, explaining, “I like a guy who is meticulous from beginning to end.”

GFRIEND
Eunha
Ask Us Anything
Min Kyung Hoon
Kim Heechul
How does this article make you feel?