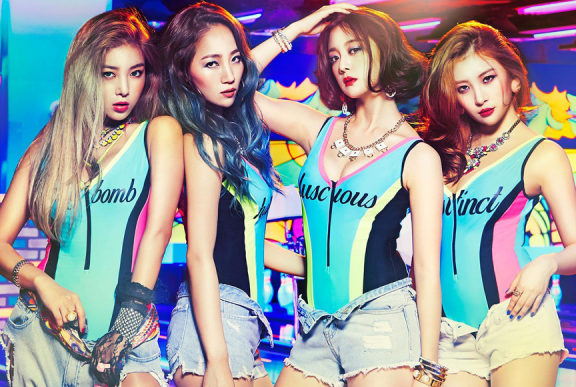 This past week was anyone’s game! With all top three songs scoring in the low 800s, the third week of August was wide open for anyone to take the top spot. In the end, the honors went to the Wonder Girls. After three weeks being second best behind GFRIEND, “Why So Lonely” recaptured the top spot on our chart. “Why So Lonely” was rewarded for its consistency across all chart sources despite not winning on any music shows last week. Indeed, this song was either No. 1 or 2 over the past five weeks, and shows little sign of slowing down. Congratulations again to Wonder Girls.

Moving up 11 spots to No. 2 is HyunA’s new song “How’s This?” HyunA celebrates her second-place win as a newly-minted full-time solo artist, as her former group 4minute disbanded not too long ago. “How’s This?” is a hip-hop style dance track with bass sound that showcases HyunA’s uniquely charming and sexy vocals. HyunA won the top spot on Inkigayo and M!Countdown last week, but this week lost narrowly to her other former group Wonder Girls. (Remember those days?) Let’s see if she can reverse the results for next week.

GFRIEND’s “Navillera” fell two spots to No. 3 after spending the last three weeks on top of our chart. This song added another two music show wins last week in Music Bank and Show Champion – a very impressive run for this sophomore group.

There are three other new songs in the Top 10 this week, and they are sitting right below the top three. Moving up 11 spots to No. 4 is Girls’ Generations’ new song “Sailing 0805.” This single, the 26th song from the weekly SM Station project, is a very special pop ballad to commemorate Girls’ Generations’ nine years in K-Pop. Penned by Sooyoung, the subtitle of the song, “0805,” refers to their debut on August 5 nine years ago. It describes the group’s long voyage to stardom, and thanks fans for their support over their long and winding journey.

Moving up 13 spots to No. 5 is Oh My Girl’s “Listen To My Word (A-ing).” This is the first-ever Top 10 hit for the rookie group Oh My Girl, but the song is actually a remake of Papaya’s hit song of the same name in 2000. The new version also features Skull & Haha, bringing a reggae rhythm to this vibrant summer song.

Also scoring their first-ever Top 10 hit is indie group Standing Egg. Their song “Summer Night You And I” moves up 13 spots to No. 6. This song dominated the independent charts the past two weeks before finally crossing over to mainstream success. As the song title implies, this song is about a couple enjoying a romantic summer night under the stars, feeling like they are the only ones in the world.