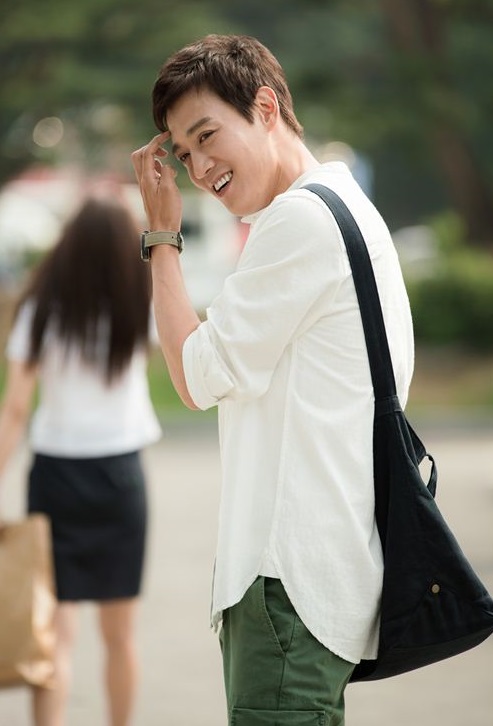 In an interview published by magazine Woman Sense, the actor opened up about portraying a neurosurgeon in “Doctors,” his first bright, happy role since “Attic Cat” and “My Little Bride.”

Coming from his previous legal thriller drama “Punch,” the actor shares, “I was a little excited and worried that I might seem inconsistent.” He adds with a laugh, “But then people watched me and said I was cute.”

When asked about his chemistry with his co-star Park Shin Hye, who is nine years younger than him, he says, “I was honestly burdened by the cheesy dialogue. But as we acted on set, I realized the dialogue was good and the words rolled right off my tongue. It’s always fun with Shin Hye.”

He continues, “Her high kick left a bruise on my left thigh and butt. We were early into filming then and it helped me relax and be less tense. I don’t think I was motivated enough before that.” The actor remarks, “I should film an action movie with her next time.”

He comments, “I had a friend I dated every now and then, but in the midst of that I started shooting the film ‘Gangnam Blues‘ (a 2015 film also starring Lee Min Ho), and so our relationship faded away.”

The actor explains, “At the time, I had a great desire to be completely immersed in my role. I wanted acting to be my top priority. When I get older, I’d like to focus on the people I love.”

Kim Rae Won is currently earning his title as the king of romantic-comedy through his portrayal of Hong Ji Hong, a teacher and neurosurgery specialist who helps rebellious Yoo Hye Jung grow up to be a responsible doctor. The actor has been gaining recognition for his romantic gaze and expressions, as well as his flawless chemistry with Park Shin Hye.

Doctors
Kim Rae Won
How does this article make you feel?