The August 21 episode of MBC’s “Section TV” took audiences behind the scenes of Kwak Si Yang and Han Ji Hye’s commercial, where the two of them play a couple.

The two of them shared a physical and emotional chemistry as Han Ji Hye said, “I’m happy that I can do this with someone taller than me.” Kwak Si Yang is 187 cm tall (about 6’1″) and often showed his “manner legs” by accommodating Han Ji Hye’s height during the shoot. 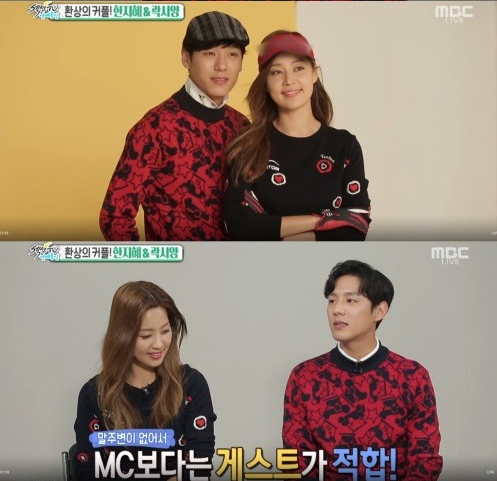 As the sunbae, Han Ji Hye also teased her CF co-star, saying, “You look better in photos than in real life.” Kwak Si Yang playfully replied, “This is an insult.” Han Ji Hye also joked around with the interviewer; when they asked how she kept her youthful face, she said, “I was born this way.”

Han Ji Hye, who has been active as both an actress and an MC, said during the interview, “People complimented me [when I emceed], but I think I’ll stick to acting.”

Kwak Si Yang, on the other hand, said, “I don’t really talk a lot. I think I would prefer being a guest to being an MC. I’d rather do something that requires physical movement.”

Kwak Si Yang recently wrapped up his stint on “We Got Married.” What other variety shows would you want to see him do?