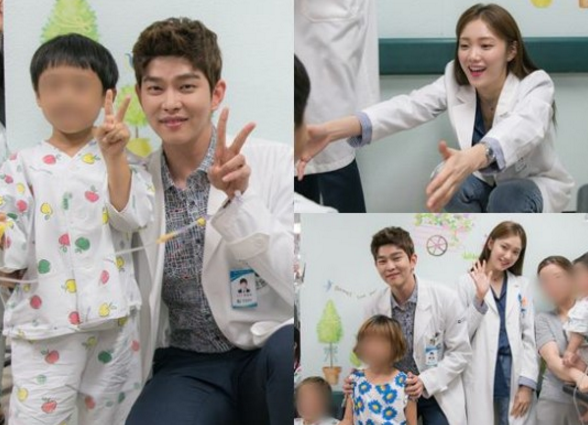 Recently Yoon Kyun Sang and Lee Sung Kyung held a free hug event at a children’s hospital in Incheon where they were filming for “Doctors.”

The event was held due to Lee Sung Kyung promising a free hug event if “Doctors” passed 20 percent ratings. Recently during the 15th episode, the ratings were at 21.3 percent and passed the promised mark.

Lee Sung Kyung shared her idea to make the event meaningful with the production team. After Yoon Kyun Sang showed interest in participating, the two created a surprise free hug event for young child patients and their families who were having a hard time.

A source from the drama stated, “Since the actors film a lot in hospitals, they wanted to encourage patients who were having a hard time. While the young children were happy to hug the actors, both Lee Sung Kyung and Yoon Kyun Sang shared that they received more energy after seeing the children courageously fight their illnesses.”

“Doctors” will be airing two consecutive episodes on August 22, 10 p.m. KST, and will air its final broadcast on August 23.