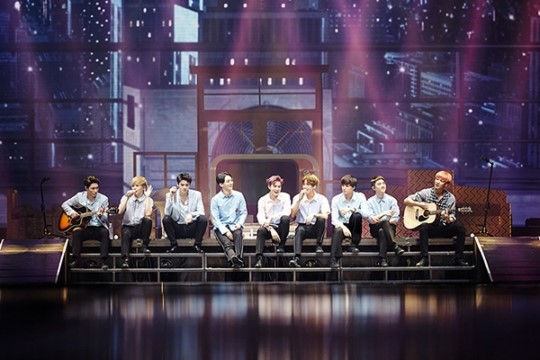 Get excited to see all nine members of EXO on a new variety show!

On August 23, SM Entertainment revealed, “EXO will be appearing on ‘Star Show 360.’ They plan on filming today.”

Notably, Kai will also be joining his members as a guest. Due to his injury, the idol has been unable to participate in performances so far this promotional era, making this appearance even more meaningful. However, SM reiterates that Kai is still in recovery and unable to perform on music broadcasts at this time.

“Star Show 360” is a new MBC variety program where stars will candidly share their stories through a multitude of mediums, and will be emceed by Tak Jae Hoon and Super Junior’s Leeteuk. It will premiere on September 19 at 11:10 p.m. KST.

Meanwhile, EXO is currently promoting their newest title track “Lotto,” and has been seeing huge success on the charts and in sales.

EXO
Star Show 360
How does this article make you feel?