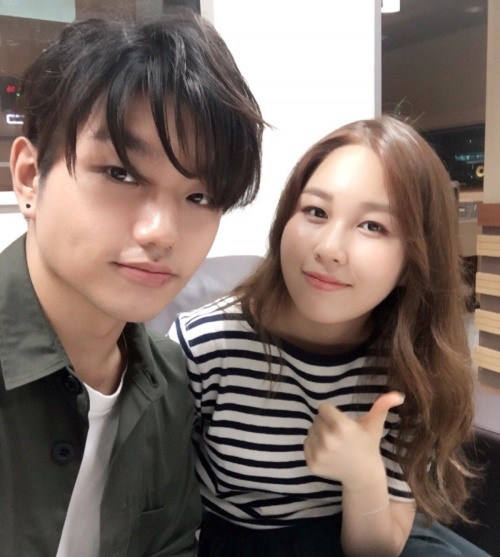 The two are only a year apart in age and as close as family, housed under the same agency. Kwon Jin Ah described Sam Kim as “a funny guy who plays guitar” while Sam Kim described Kwon Jin Ah as “an angel voice.”

Both of them consider Yoo Hee Yeol, the founder of their label Antenna Music, like a father. When asked if they had any complaints, Kwon Jin Ah joked, “He eats two pieces of bread over an entire hour. I wish he’d eat more.”

Sam Kim added, “I wish he’d drink less coffee and drink water instead. And he’s too thin, so he should eat his bread faster.”

This past July, the two of them released a duet song “For Now,” which Sam Kim wrote himself. “Sam wrote the song first and I trimmed it. We worked on the lyrics with Yoo Hee Yeol.”

“Yoo Hee Yeol told me that if I didn’t write songs, he wouldn’t let me debut,” Sam Kim shared. “Without the guitar, I’m nothing. I started piano when I was young but after practicing too much, I quit. I fell in love with the guitar as soon as I started. It’s the whole reason I’m into music.”

Kwon Jin Ah also said that she would like to be reborn as a guy in the next life. “It’s tiring being a girl,” she said. “There’s so many things you have to take care of. Even in underwear, there’s a top and bottom…”

Sam Kim agreed, saying, “It’s comfortable being a man. When I see the way women live, I always want to tell them, ‘You work so hard.'”

Both of them have a positive outlook despite the sometimes difficult life of a celebrity. “Negative comments are better than no comments,” they said. “You can learn from negative comments.” But Kangta said, “I think it’s because you’re still rookies. It’s been 20 years since my debut and negative comments still make my blood boil.”

Sam Kim said thoughtfully, “I think it’s because I don’t understand 80 per cent of the comments. If I understood them fully, I would be able to learn from them.”

Kwon Jin Ah and Sam Kim will be participating in their label’s concert series on September 24 and 25 at the Olympic Hall.