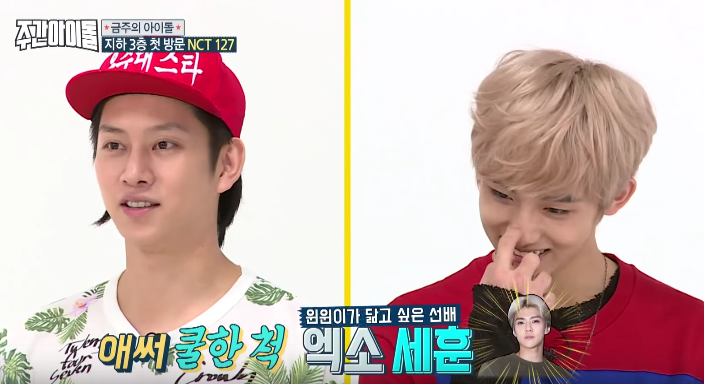 On the August 24 episode of “Weekly Idol,” NCT unit group NCT 127 appears as a guest and reveals which SM sunbaes they want to resemble.

During their introduction, member Taeyong reveals that the reason NCT 127 decided to come out on “Weekly Idol” is because they knew their label sunbae Kim Heechul would take good care of them.

Despite this, when Hani reads out the list of SM artists that the members of NCT 127 have chosen as their role models, Kim Heechul is nowhere to be seen on the list.

Each member chose a different SM artist. Hani reveals, “Taeyong chose TVXQ’s Yunho as the sunbae he’d like to emulate.”

Taeil is revealed to have chosen Super Junior’s Kyuhyun as his role model, and WinWin chose EXO’s Sehun as his.

“There is no one who wants to take after Kim Heechul,” Hani says, cracking up.

When asked why Taeyong didn’t choose Kim Heechul, he explains, “There’s a lot that I want to emulate in Heechul hyung.”

“Heechul hyung is extremely friendly too us,” Taeyong insists. “He really takes care of us more than any other sunbae.”

Kim Heechul
NCT 127
How does this article make you feel?