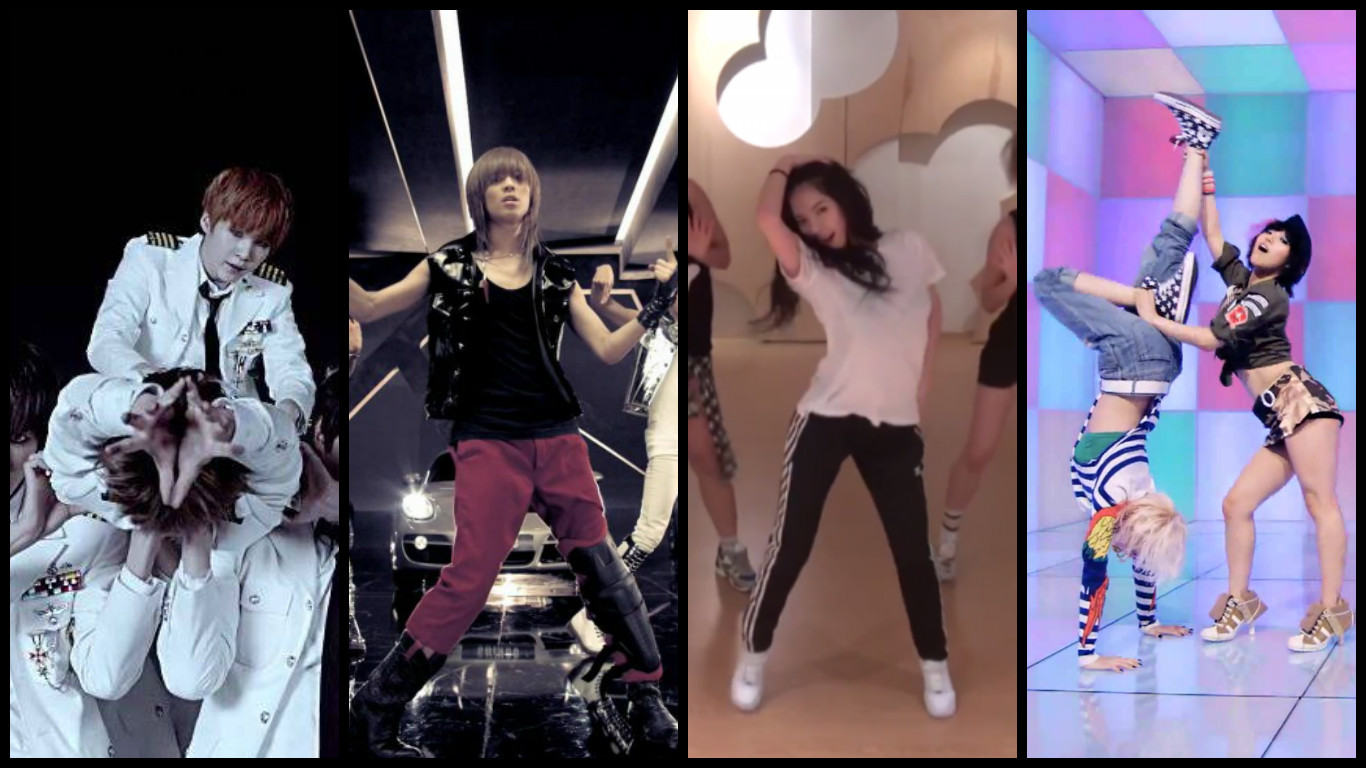 The 15 Most Difficult K-Pop Choreographies

If you know anything about K-pop, you know that it has some of the most wicked choreographies worldwide. These choreographies are clever, conform to the group’s concepts, and always show a level of polish that makes the performers shine. In this world of amazing choreography, there are a few stand-outs. These are the choreographies are so difficult that we exclaim aloud whenever we watch them and wonder how in the world anyone could execute them. Let’s check out 15 of the most difficult K-pop choreographies for male and female groups – separated as they tend to showcase different styles.

Male idol groups are known for their hard-hitting moves, high-energy formation changes, and the sheer power behind their dancing. SHINee defines what a solid dance group should look like by embodying all those qualities. They take on all the latest dance trends and work them to perfection, which we then get to see in video and onstage. In 2010’s “Lucifer” (choreographed by Rino Nakasone and Shim Jae Won), they take on tutting and other forms of precise hip-hop that is done in such amazing synchronization and with such speed that it’s jaw-dropping. The entire dance is high-speed, calculated movement, synchronization, and incredible artistry. Put it all together and you get one very difficult dance.

BTS only has three years after debut under their belt, but they are already known as a powerful dance group with seven members who hit their moves and hit them hard. They exude pure masculine energy, and no dance shows that energy, or their sick dance skills, better than their hit “Fire,” choreographed by Keone Madrid. It’s all about the footwork, stamina, and the juxtaposition of fine movement with looser movement that requires tons and tons of energy. This choreography is not a race to the finish. It needs consistent strength and dedication to complete – and to complete it during performance quality is no small feat.

EXO took on some hefty Tony Testa choreography with “Wolf.” Testa is known for his driving choreography that requires huge amounts of energy and “Wolf” is no different. EXO literally flies over the stage, jumping like beasts, jerking in sudden direction changes, waving their arms, and barely stopping for a moment. The infamous tree formation takes incredible finesse, which means very strong, lean muscles, and there are so many level changes that it’s easy to become exhausted just by watching this savage number. This is no dance for the novice and only a group like EXO could possibly tackle it.

Along with SHINee, INFINITE has come to be known as a top dance group that has incredible synchronization and finesse. They boys are a master of formation shifts and no dance shows that better than “Destiny.” The dance requires the ability to give and take spotlight from member to member, to work in groups with separate choreography that must look matched, and then to match up level changes, formation changes, and sharp movement consistently during the nearly four-minute number. This dance takes on a lot of upper body work that requires accuracy and precise arm placement.

Jeri Slaughter’s “Tarantallegra” choreography is bombastic and full of personality just like the artist is was created for: Junsu. This choreography requires tons of core strength and the ability to “get low.” It’s a sexy number that shows of the smooth edges of Junsu’s dance skills. That kind of gliding precision is incredibly difficult because it requires intense coordination and the ability to handle repetition without diminishing the movement. Bravo, Junsu. This is a massive dance work that you totally conquered!

MONSTA X came to us via survival show last year and danced into my heart during KCON LA. They were monsters onstage, full of energy and huge movement. So when I embarked on a search for difficult dances, MONSTA X quickly came to mind. Recent single “Stuck” is difficult in that it requires heavy group work and skilled solo dancers. This choreography is quite masculine, like “Fire,” but contains elements of the sexiness in “Tarantallegra” that reflect the necessity for finesse and extremely good body conditioning.

Hard-hitting B.A.P brought us nothing less than a powerhouse performance with their “One Shot” choreography that reminds me a lot of “Fire” in the requirements for this difficult dance. There is tons of level work and floor work that needs a mixture of sheer muscle strength and pointed finesse. Dances like this reflect the amazing capability of the human body in the sustained energy it can deliver. It’s a highly aerobic dance that has few moments of respite and really tests the dancers’ ability to tackle it and infuse the movement with artistry.

Another Tony Testa number that is so difficult to take on that Onew injured himself. I have seen this live several times and it is absolutely incredible to see how much movement is packed into such a short period of time, and how much of that movement is microscopic in detail. Testa focuses on coordinated body movements that line up with group synchronization as well as complex formations and waterfalled choreography. Again, like all of the dancers mentioned before this one, this is a stamina-testing number that necessitates sharp movement and prolonged intense movement. Bravo, SHINee. You always rock the dance. And bravo for rocking such a difficult number!

(Please skip to 1:46 below if you want to get straight to the dance. The first minute and forty-five seconds is adorable introduction, which is also worth a watch!)

Girl group choreography may not seem as difficult as boy group choreography because the focus is often to deliver an image that is cute and/or sexy, rather than showcasing sheer physical strength. But this alternate focus doesn’t detract from the difficulty of the dances. Unlike men, women must often dance in heels, and the undulating movement of chests and hips takes incredible core strength. miss A’s “Breathe” demonstrates this perfectly. There are long periods of chest and hip isolations that require immense core strength and coordination abilities. Not only is this dance a great core workout, but the girls perform tons of level work that shows off how in shape one needs to be to get through this dance in one shot, especially with the precious few rest periods the choreo provides.

There is a reason pole dancing is offered as an exercise class: It requires loads of full-body strength to pull off in a truly fluid and sexy manner and After School killed it in “First Love.” These girls need serious upper body strength to round the pole as they do, and the slow body roles and large hip movements takes control that only comes with lots of practice. They have to perform a lot of repeated movements and that becomes difficult as muscles fatigue from repetition. The slower tempo of the song actually provides its own difficulty in that the movement must sustain in order to look fluid. Awesome job, ladies! And awesomely sexy!

Chocolat brings us such a fun dance with “Syndrome,” but it keeps moving and requires so much consistent movement with a lot of tiny jumps in heels that it is very difficult. This is a stamina-heavy number, but the song is so light-hearted and the movements so adorable that it may not seem as difficult and hard to pull off as it actually is. Hips and shoulders require precision here and that becomes so difficult to execute as time moves on. Still, this song and number makes me want to dance along with them!

HyunA is the queen of sexy, but to execute all that big movement is not as easy and breezy as she makes it look. “Red” is a heart-pumping, stamina-testing dance that needs a strong core and hyper-exaggerated movement to become the sexy number that we all know and love. HyunA’s dances always include a lot of floor and level work, and “Red” is no exception as is has her in constant movement working her hips, thighs, and rear. There is basically only one period of rest and then she jumps right back into the big, sexy movements she has built her career on.

Girls’ Generation’s “I Got a Boy”

“I Got a Boy” perfectly displays why Girls’ Generation are the queens of K-pop. As the song transitions through styles, so does the dance. Like all the dances on this list, this dance gives the ladies little respite to catch their breaths. Instead, it sends them deeper into body rolls, strong arm movements, and low level work. Smaller movements found in the dance are not difficult in and of themselves, but linked together into constant dancing, these small movements become the largest challenge of this world-famous song. Also, this is almost a four minute and thirty second song while most pop numbers are around the 3:30 mark. These ladies not only make this look easy, but they make it look good.

BoA has defined K-pop and K-pop’s entrance into Japan and the world with her practiced vocals and incredibly sharp dancing. I turned immediately to her repertoire of dances to find a difficult dance and “Only One” was at the top of the difficulty list. She can pop, hip-hop, and coordinate like no one’s business. This dance takes attention to detail and the ability to execute that detail so sharply that it can be clearly seen. It has some of the most demanding hip hop found in female repertoire and mimics the movement often found in male routines. This dance takes a genre dominated by men and creates a powerful, difficult number for women. Girl power!

On first glance, “Dumb Dumb” may not seem difficult, but it is. Constant movement is what makes this dance so hard to execute. These ladies don’t stop moving from start to finish, match movement to nearly every beat of the music. Even during the vocal break the dance continues, providing zero respite. It’s also a true test of coordination and requires complete follow-through on every movement to be effective. On top of all of that movement, these ladies have to make it look effortless and easy, which is a test in and of itself. Phew!

GFRIEND is one of those groups whose ascent to the top surprised many, but it all makes sense when you actually see them in action. Their dances are unique, and the members excel in terms of keeping things tightly synchronized. All of their songs are known for advanced choreography, but “Navillera” is the dance that GFRIEND’s members picked out as being the most difficult. The combination of the swinging arm movements and intricate footwork make this a dance that’s not easy to pull off, but GFRIEND does it perfectly. Every member pulls her weight to deliver a fast-paced performance that’s impressive to watch while appearing deceptively easy.

Which K-pop choreography do you think is the most difficult, Soompiers? Let us know in the comments below!

Raine0211 is a lover of all things Korean, especially K-pop, K-drama, and Korean food. When she’s not writing for Soompi, she’s playing the cello and singing. She happily indulges in all kinds of K-pop, but her biases are SHINee, INFINITE, and VIXX. She lives with her sister, her roommate Elsa, and her two cats, Timmy and Momo, all of whom also love K-pop and K-drama.