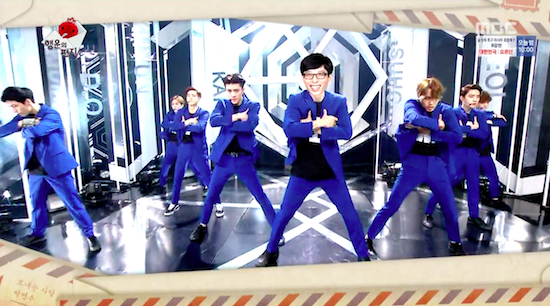 Yoo Jae Suk will be joining EXO on stage during the world tour!

MBC and SM confirmed that Yoo Jae Suk plans on performing with EXO at an overseas concert in order to fulfill his mission from “Infinite Challenge” to collaborate with EXO.

EXO recently released their third repackaged album “Lotto” and have won first place at many music shows. Following their album promotions, the group will start their world tour and head to Thailand. Yoo Jae Suk will join EXO at the Bangkok concert. EXO has concerts in Bangkok scheduled for September 10 and 11.

Yoo Jae Suk has been practicing the dance since August. The MC and boy group have practiced together whenever their busy schedules allowed it.