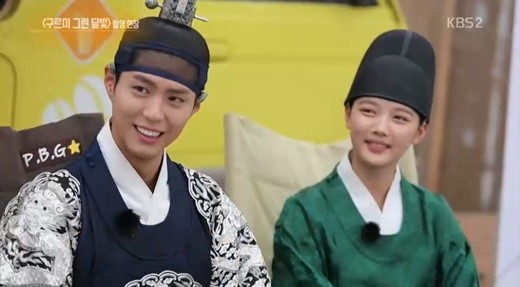 On the September 3 episode of KBS 2TV’s “Entertainment Weekly,” actors Park Bo Gum and Kim Yoo Jung sit down with the show to talk about their current drama “Moonlight Drawn by Clouds.”

During the interview, reporter Kim Tae Jin asks Park Bo Gum and Kim Yoo Jung to make another ratings promise given how close they already are to the target for their first rating promise, 20 percent.

“If your viewership rating exceeds 30 percent, how about you guys appear on a guerrilla date [together] after the drama is over?” Kim Tae Jin suggests.

“I think it will be fun…” Kim Yoo Jung says.

“You can go to an amusement park and play to your heart’s content,” Kim Tae Jin says persuasively, and Park Bo Gum and Kim Yoo Jung give their okay.