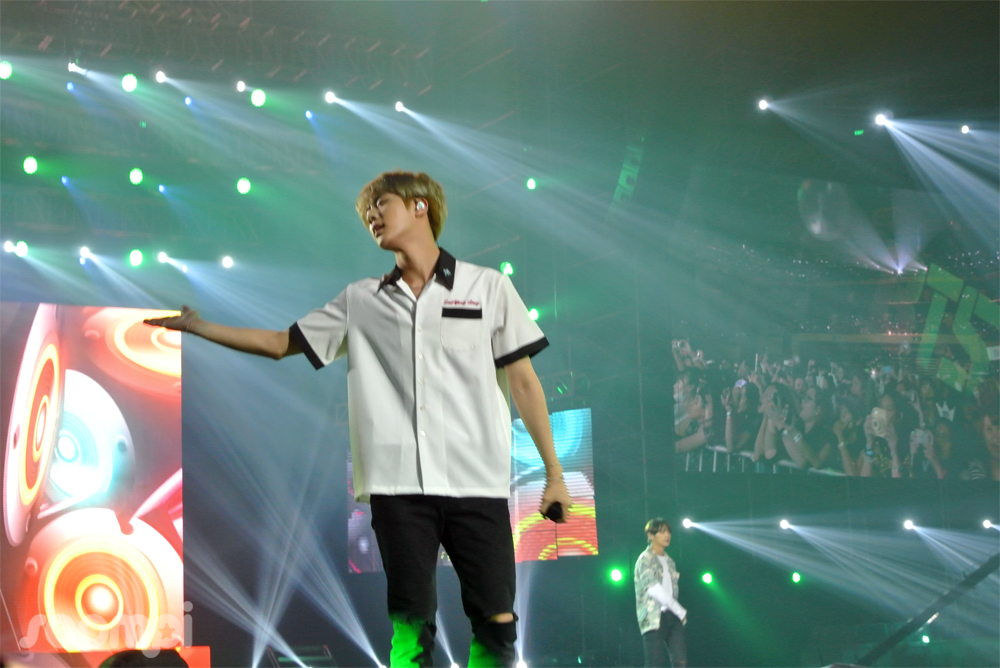 Who loves a good K-pop concert? We here at the Soompi team sure do! In fact, we were recently at the MBC Show Champion in Manila concert where the ever popular Show Champ shot their 200th episode! Wow, 200. That’s a lot, isn’t it?

The Soompi team had a blast at the show and we’ll share with your our favorite moments from it (and the press conference before the concert too)!

1. Gugudan said this is their first overseas trip. 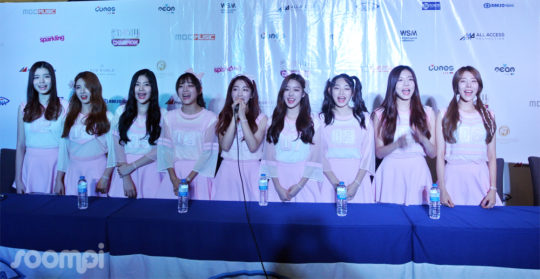 During the press conference, the girls of Gugudan said they were really happy to be part of the show since it’s not just Show Champion’s 200th episode, it’s also their first time out of Korea as a group! How cute is that? 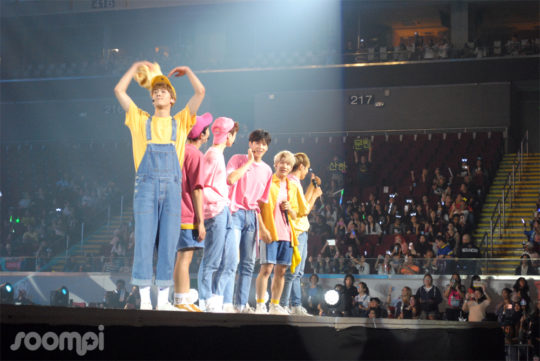 Apparently, member Eunwoo spent part of his youth in the Philippines, and eating at the local fastfood chain, Jollibee, brings back memories of that time. It wasn’t just Eunwoo who ate Jollibee – the others tried it too! And they have selcas to prove it!

3. VIXX fulfilled their promise to be back.

At the press conference, VIXX shared that they were happy to be back in Manila because they promised Starlights that they would return during their VIXX Live Fantasia — Utopia stop in Manila last year. Leo was sorely missed but we hope for his quick recovery!

M&D singing an old SuJu trot track – Rokkugeo at #mbcshowchampinmnl! Who remembers this?

Who remembers Super Junior Trot? M&D wowed us with their songs but they owned the stage when Heechul started singing Rokkugeo. Enough said.

5. SONAMOO showed how to do the hand dance for “Round N’ Round.” 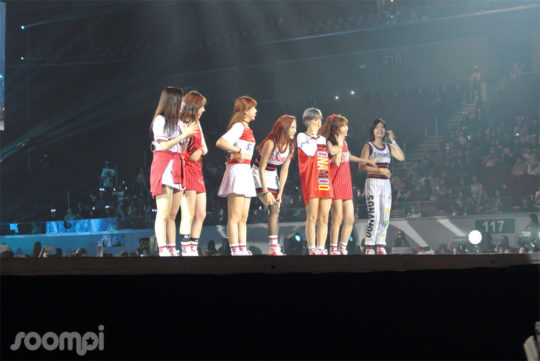 Rookie group SONAMOO shared how to do the hand dance for “Round N’ Round” during the press conference. Cue the aww. Now, we’ll be doing it too when we listen to the track. (Truth: We may have done it during the concert.)

6. BTS picked up some Filipino phrases. 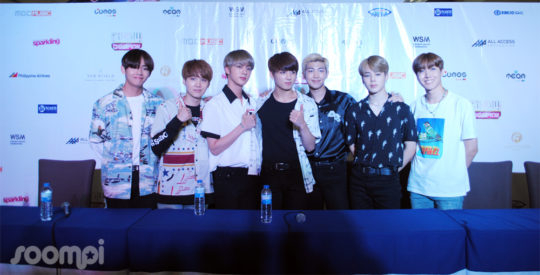 Fresh off the success of the Manila stop of their “On Stage: Epilogue” stop in Manila a few weeks ago (which they also pointed out), BTS gamely shared what Filipino phrases they learned from their last trip. Suga now knows how to ask fans if they enjoyed and Rap Monster can say good evening in Filipino. J-Hope though can say “Pak ganern!” which is a new local street slang which translates to on point. Hats off to whoever taught him that!

7. AOA wants to take a vacation in the Philippines. 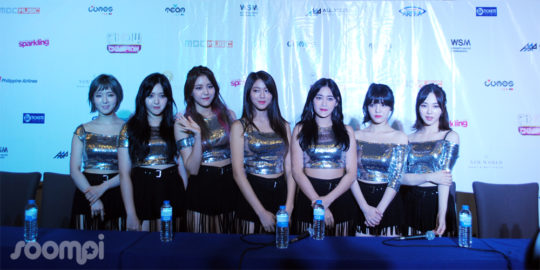 The sexy girls of AOA talked about taking a vacation in the Philippines when they have time. They seem to be a fan of beaches (the “Good Luck” music video, anyone?) because most of them said they want to go to a beach in the Philippines. Fear not, girls, we got lots of beaches so you can bask in all that sunshine when you get the chance. 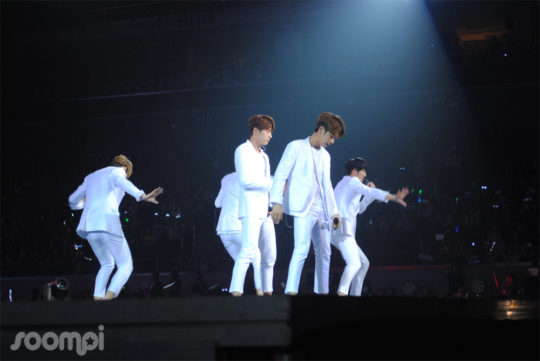 There is something about idols and white suits. Throw in performance, manliness and powerful choreography and that was basically KNK during the show. We have no words. Oh, and they did mention working on a second album during the press conference. Something to tide us over from their amazing perf.

When it was really just the afternoon. We totally appreciated the gesture though, gents! And we loved the energy during “That’s My Jam.”

10. Kim Shin Young was happy to be back. 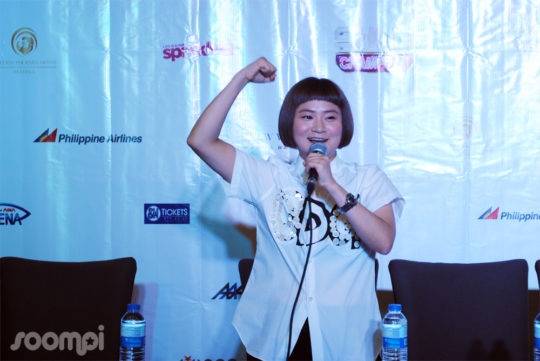 The media had a chance to have a chat with the Show Champ host before the concert and Kim Shin Young shared that it’s not her first time in the Philippines! She was previously in Cebu (a city a bit down south of Manila) for a vacation. She mentioned it was good fun and it was great to be back even for work. 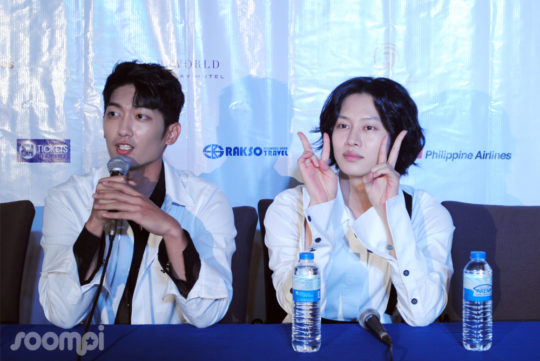 During the press con, M&D were asked what they miss about Manila, since both have been to the Philippines before. Heechul said he’s been to Manila so often (for different concerts), he doesn’t miss anything. As expected of Heechul.

There you go, Soompiers! Ten things we loved about Show Champion in Manila. Super thanks to our friends from All Access Productions for inviting us to the show. Catch Show Champ’s 200th episode with the performances from the concert on September 14!