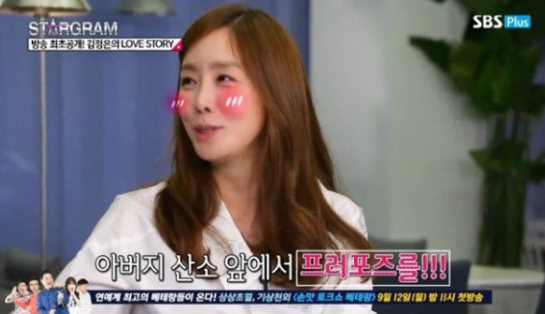 Kim Jung Eun opens up about the surprising, yet sweet proposal she received from her husband.

The actress was featured on the September 6 episode of the SBS Plus show “Stargram.” She appeared on the segment called “Star Pouch,” in which stars reveal the contents of their pouch and share their beauty tips with the audience.

On this episode, Kim Jung Eun shares the story behind her marriage to a non-celebrity who works as a fund manager.

She reveals, “We met about three, four years ago. He was so passionate that he asked to get married within a month of us meeting. But at the time, I wasn’t ready so we didn’t get married. Then time passed and when it came around to getting married, my husband hadn’t proposed.”

She continues, “His father had passed away the previous year and one day, he said that he needed to tell his father that he’s getting married and so he asked me to go to his father’s grave with him. There, he said, ‘Father, we’re getting married,’ and proposed to me. Since it was a grave, I wasn’t wearing a dress or anything and I was just wearing exercise clothes with no make up on. He told me that he wanted to propose in front of his dad and had even prepared a ring. I cried immediately,” sharing her emotional reaction to a sweet surprise from her husband.

Kim Jung Eun
Stargram
How does this article make you feel?