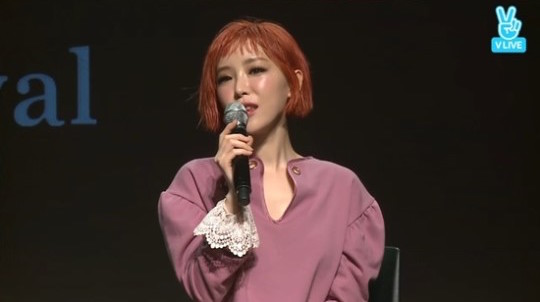 On September 9, Brown Eyed Girls’s Ga In explains how she feels about her newest concept during her comeback showcase.

The singer starts off talking about her latest music video, “Carnival,” and how it has a more pure-like feeling compared to her usual work.

Continuing, Ga In goes into more detail about her signature smoky makeup look, and says, “My makeup in my usual videos are usually so dark that when I close my eyes, it seems like I have another eye.”

She explains that she wanted to try and change image this time around, which is why she went for a lighter makeup look.

“My fans get surprised when my makeup becomes lighter. In fact, some even worry. So, I even contemplated if I should wear darker makeup. That’s how much [lighter makeup] was a challenge for me,” the singer elaborates.

Ga In released “End Again,” the first of a two-part studio album on September 9 at midnight KST. She also dropped the music video for her latest title track, “Carnival” at the same time. The second part, “Begin Again,” will be released at a later time.

What are your thoughts on Ga In’s change in makeup?