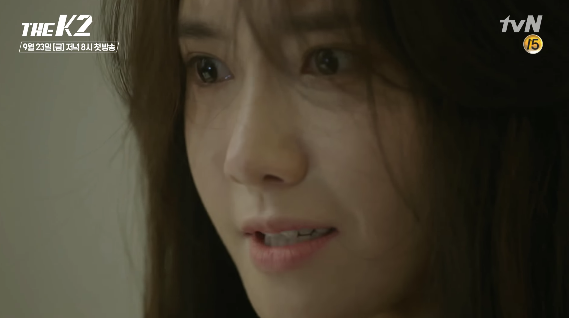 Watch: YoonA Is Out For Blood In New “The K2” Teasers

Upcoming tvN action drama “The K2” has released a new batch of video teasers that reveal the tense relationship between the characters played by the main cast YoonA, Ji Chang Wook, and Song Yoon Ah.

It looks like both women have some sort of tie to Ji Chang Wook, as he is seen taking orders from both of them.

In one teaser, YoonA tells Ji Chang Wook over the phone, “Don’t die. That’s an order.”

In another teaser, Song Yoon Ah gives her set of orders to Ji Chang Wook over the phone, saying, “Don’t move without my command.”

In the third teaser, Ji Chang Wook presses a gun against Song Yoon Ah’s head. YoonA is looking on and screams, “Shoot! Shoot! Kill her! Kill her!” The video ends with Ji Chang Wook narrating, “There was someone else who wanted you to die.”

Oh, and there’s this video that serves the sole purpose of showing off Ji Chang Wook’s abs. We’re not kidding.

“The K2” will air its first episode on Friday September 23 at 8 p.m. KST. Are you excited for this drama?