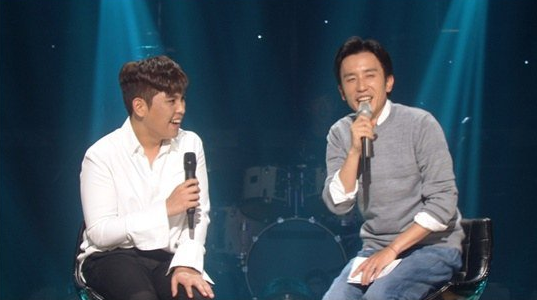 Singer Han Dong Geun opens up about his extreme dieting on the latest episode of “Yoo Hee Yeol’s Sketchbook.”

On the September 9 episode of the KBS 2TV music show, Han Dong Geun performs and has a short interview with the host, Yoo Hee Yeol.

He tells Yoo Hee Yeol, “When I see you on TV, you look like a skinny ape but now that I see you in person, you are so bright and tall,” as the audience explodes in laughter.

When he hears that he is said to look like fellow singers Kim Beom Soo and Lee Seung Chul, he says, “I’ve also seen in the comments that I am similar to them in singing as well. I’m so thankful for those sentiments.”

He confesses that he has been concerned with taking care of his physical appearance these days, saying, “Recently, I got fillers in my nose and chin. I only ate one meal a day and lost 12 kilograms (approximately 26 pounds) in two months.”

He talks about those first moments as a singer, revealing, “At the time, Seo In Guk was doing well and so I was expecting that for me as well but it wasn’t easy. I even thought if I should just give up on music.”

Well, it’s a good thing he persevered because he won first place on the September 9 episode of KBS’s “Music Bank”!

Yoo Hee Yeol's Sketchbook
Han Dong-geun
How does this article make you feel?