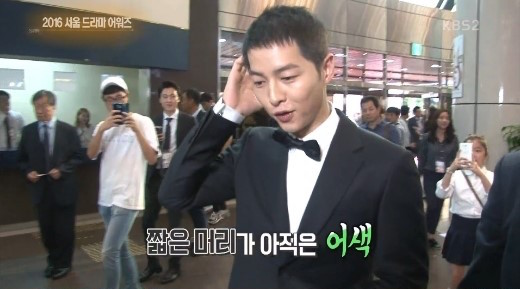 During a brief interview with Song Joong Ki, the actor reveals, “I cut my hair because I’m currently filming a movie, but it feels awkward. I hope you can look at it favorably.”

The interviewer then asks, “We asked who Hyeri of Girl’s Day wanted to work with between Song Joong Ki and Park Bo Gum. Who do you think she chose?”

While Hyeri reportedly answered that it would be an honor to work with both actors, Song Joong Ki has a different response.

The actor easily replies, “Wouldn’t she have chosen Bo Gum because she’s close to him? Also, these days Bo Gum is the trend.”

Song Joong Ki had nothing but compliments for his labelmate on the red carpet as well, and expressed his wish to work together sometime.

The interview is sadly cut short due to time, but he politely says, “Please have a good holiday,” and sends his warm regards for the upcoming Chuseok season before being ushered away.

What do you think about Song Joong Ki’s new hair?

Song Joong Ki
Entertainment Weekly
How does this article make you feel?