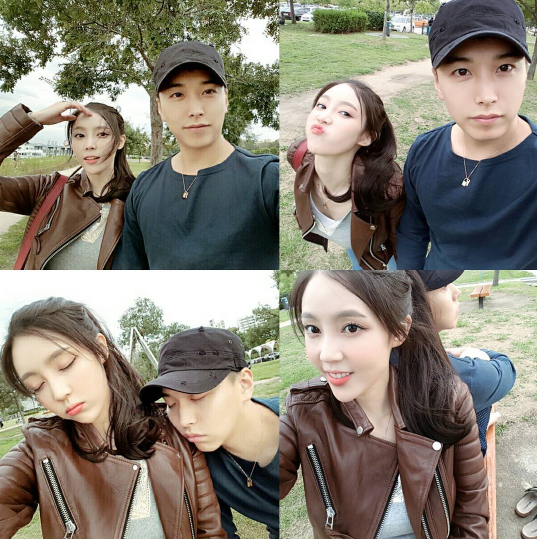 Super Junior member Sungmin is currently serving in the military, but he recently got to spend some time on leave with his wife, musical actress Kim Sa Eun!

On September 12, Kim Sa Eun first shared a collage of shots of herself with Sungmin’s arm around her as they walk in a park. She writes “Have courage and be kind” in English, and includes the hashtags “I look tiny next to my husband,” and “Boda Skins” to give a shout out to the designer leather jacket brand.

Have Courage and Be Kind. #maketheearthmove#???#남편옆에선쪼꼬미#bodaskins

She then shared a collage of cute shots of herself and Sungmin, including an adorable one of the pair pretending to be asleep. They appear to be walking and hanging out in a park by the Han River. She writes as the caption, “Healthy.”

Several hours later, she shared a screenshot of a portal’s list of most searched terms, with her name in first place! She writes as the caption, “Whoa, what a surprise.”

Kim Sa Eun and Sungmin met while appearing together in the musical “The Three Muskateers,” and tied the knot in December of 2014. Sungmin entered the military in March of last year, and is expected to be discharged this December.

Super Junior
Kim Sa Eun
Sungmin
How does this article make you feel?