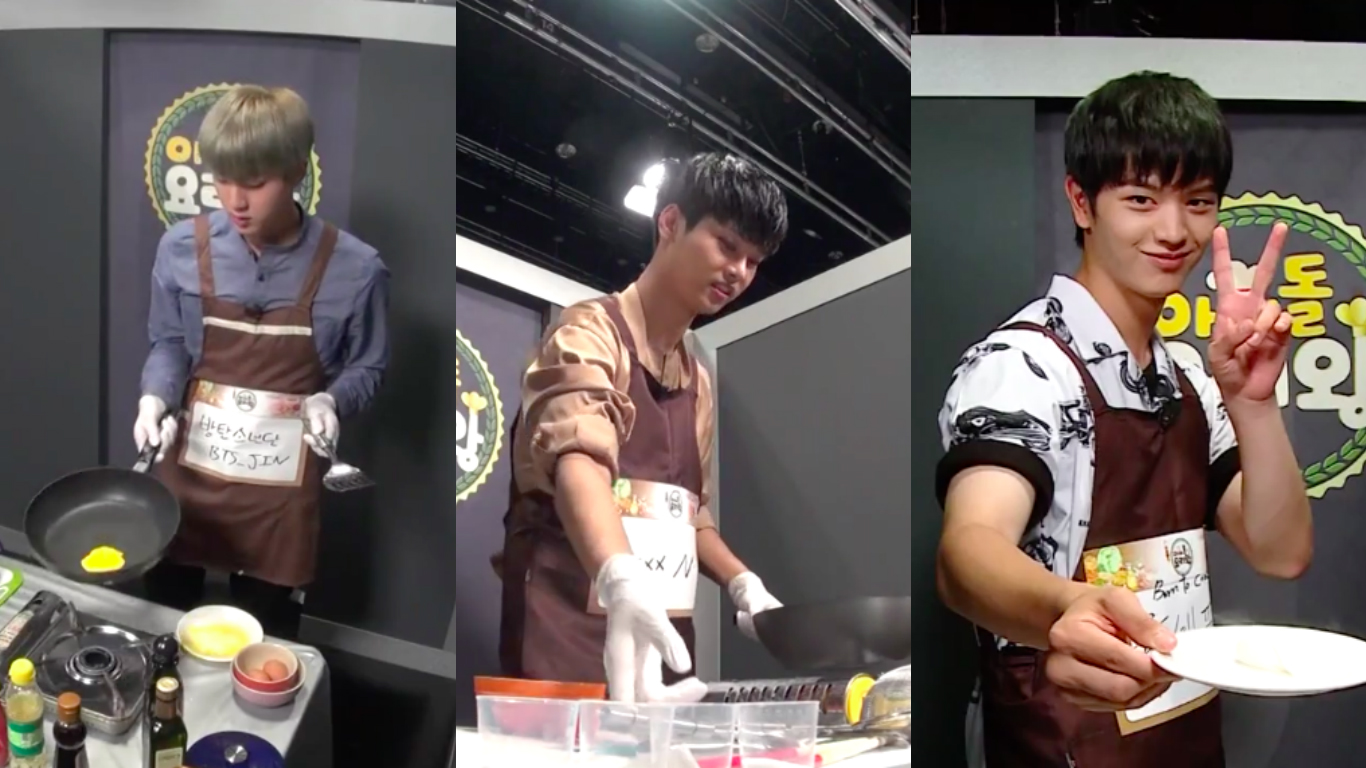 In the preliminaries, 217 idols are given the task of proving themselves as worthy of being one of the eight idols to grab a place in the main competition. They’re each set up in a booth, and given eggs, milk, ketchup, various oils, salt, sugar, pepper, MSG, and the utensils and tools they can use to complete their mission. Chef Hong Suk Chun is watching all of them on video monitors to see how they do.

Each idol is given the task of either poaching an egg or making an egg garnish that is used in many Korean dishes. A hilariously large majority of the idols struggle with the mission, and many of them don’t even know what the things they’re supposed to be making are, let alone how to cook them.

However, some idols stand out in the preliminaries for their cooking skills. VIXX’s N wows Hong Suk Chun when he perfectly flips his egg, and N seems pretty pleased with himself too. Hong Suk Chun says, “He’s doing it right! Just like a leader.” 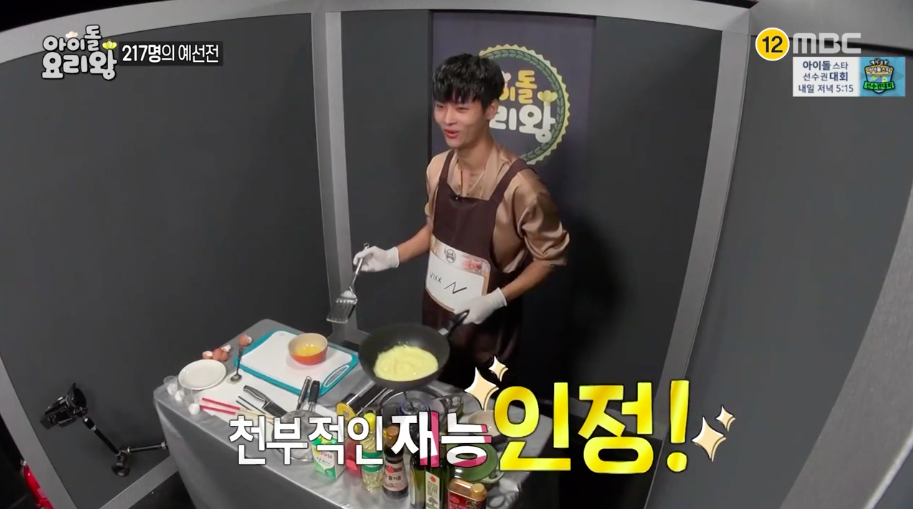 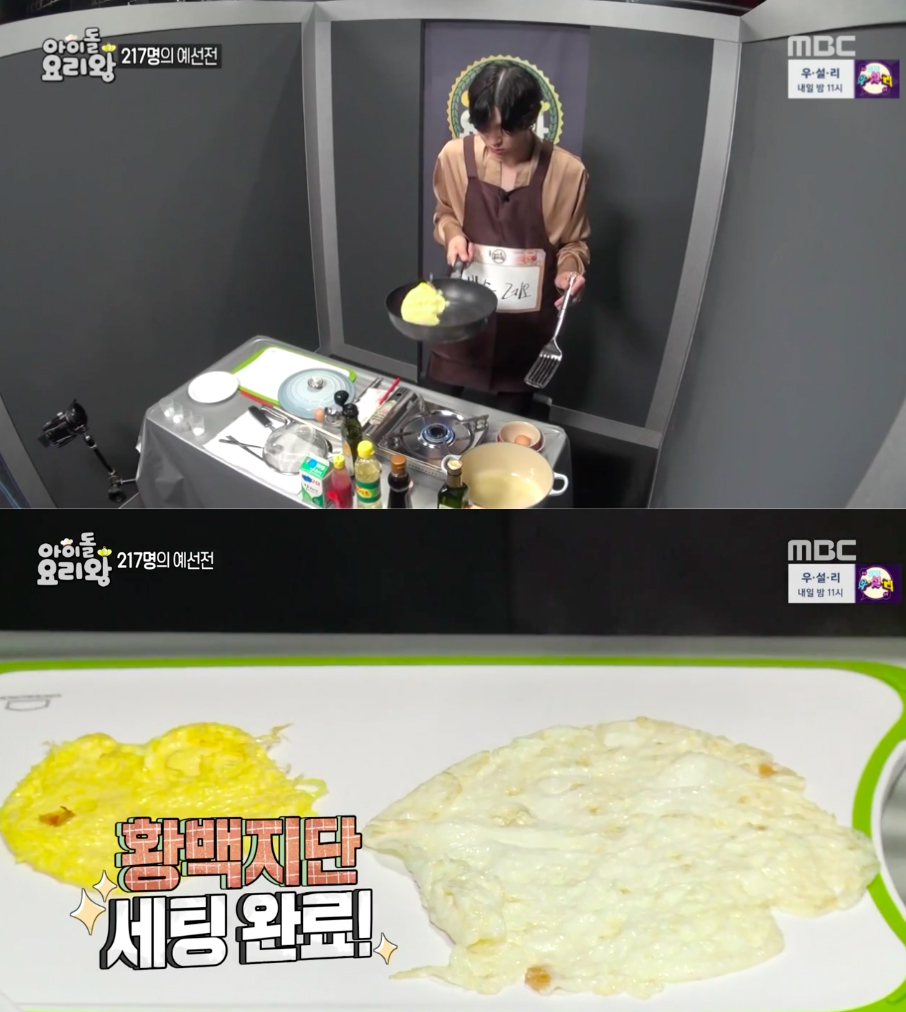 BTOB members Eunkwang and Yook Sungjae also impress Hong Suk Chun with their knowledge of how to poach an egg. Hong Suk Chun is surprised that Eunkwang knows to add cooking oil to the water first, but is then horrified when he dumps in half the bottle! Yook Sungjae however gets the portions right, earning praise from Hong Suk Chun. 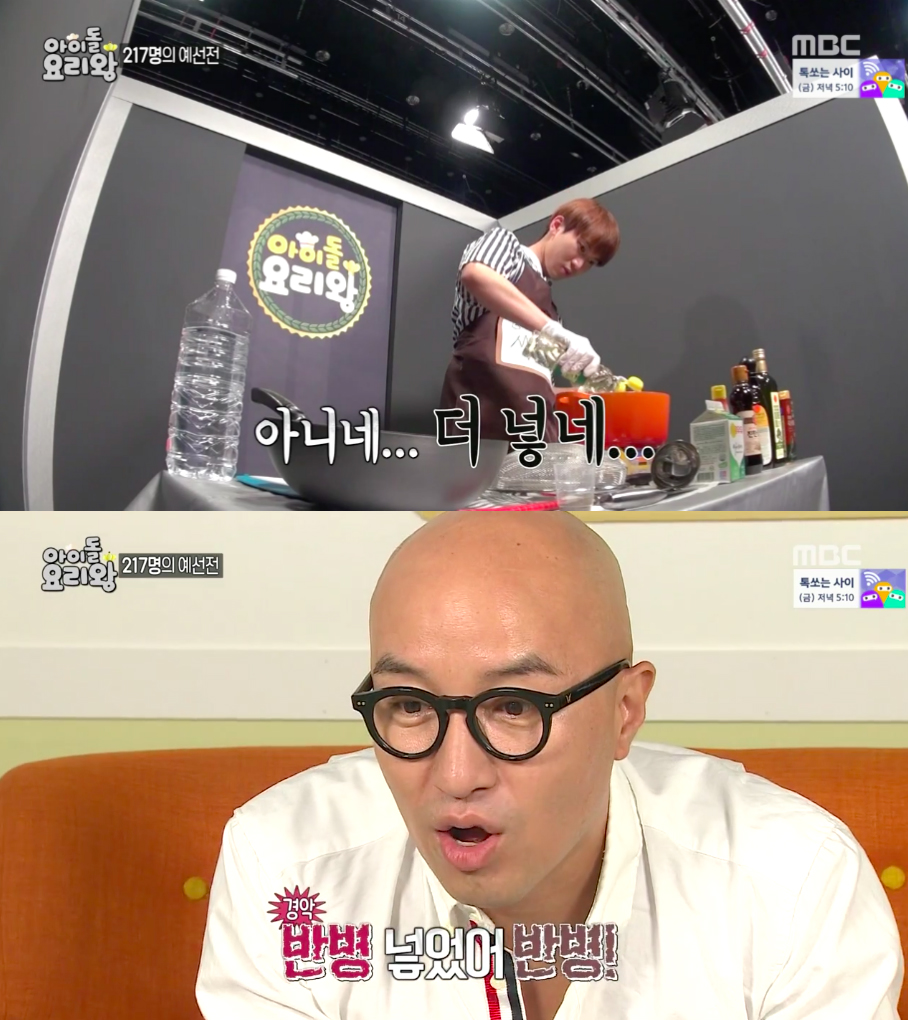 Eunkwang struggles with the time limit and can’t poach his egg in time, but Yook Sungjae manages to get his egg poached. “See you in the competition,” says Yook Sungjae confidently. 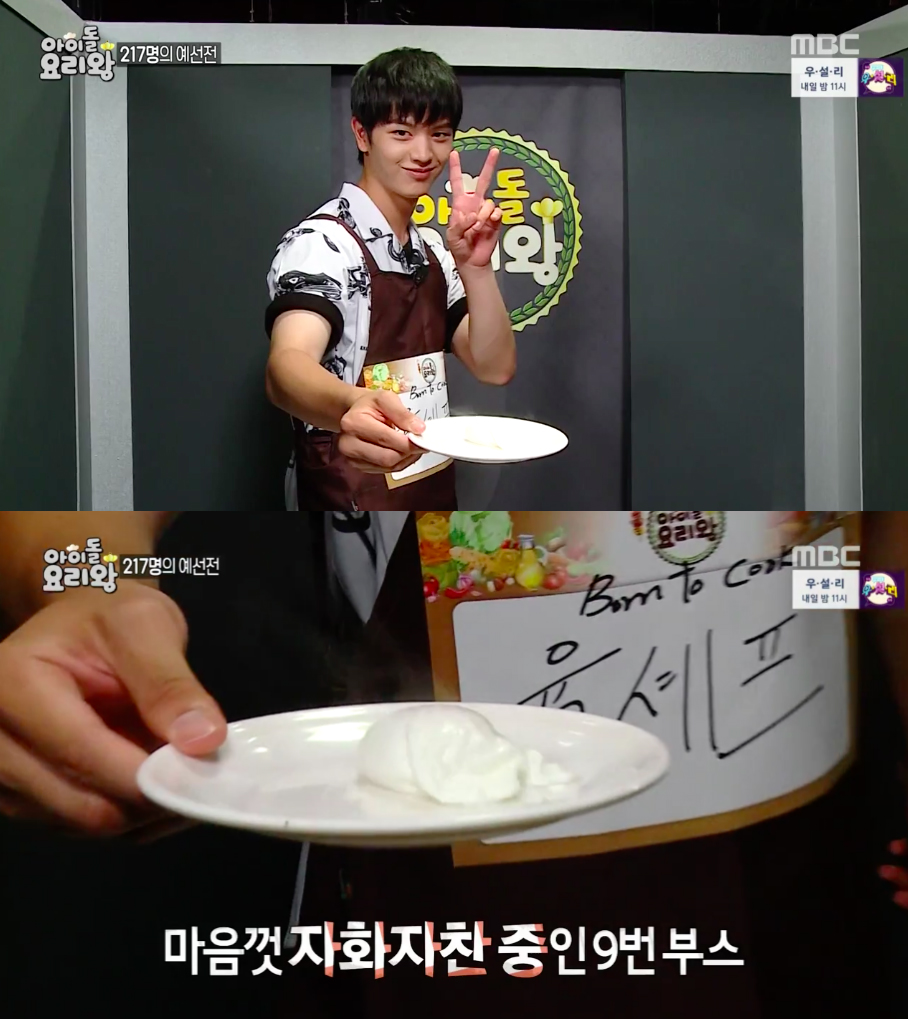 Yook Sungjae then happily gets to tease Eunkwang in his booth for having to plate an uncooked, runny egg. 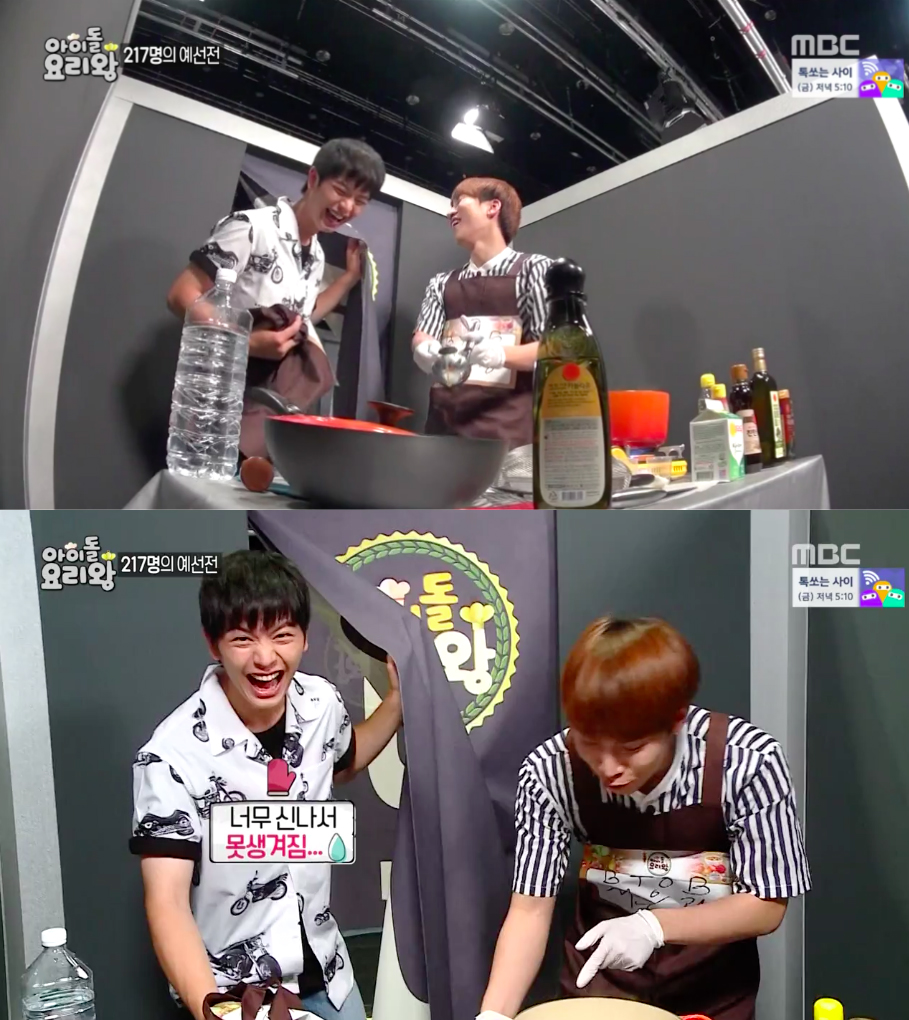 BTS’s Jin, who appears as the only representative from his group for the show, is tasked with making the egg garnish, and doesn’t hesitate before he sets to work. He hums to himself as he cooks, and manages to make a perfect garnish. 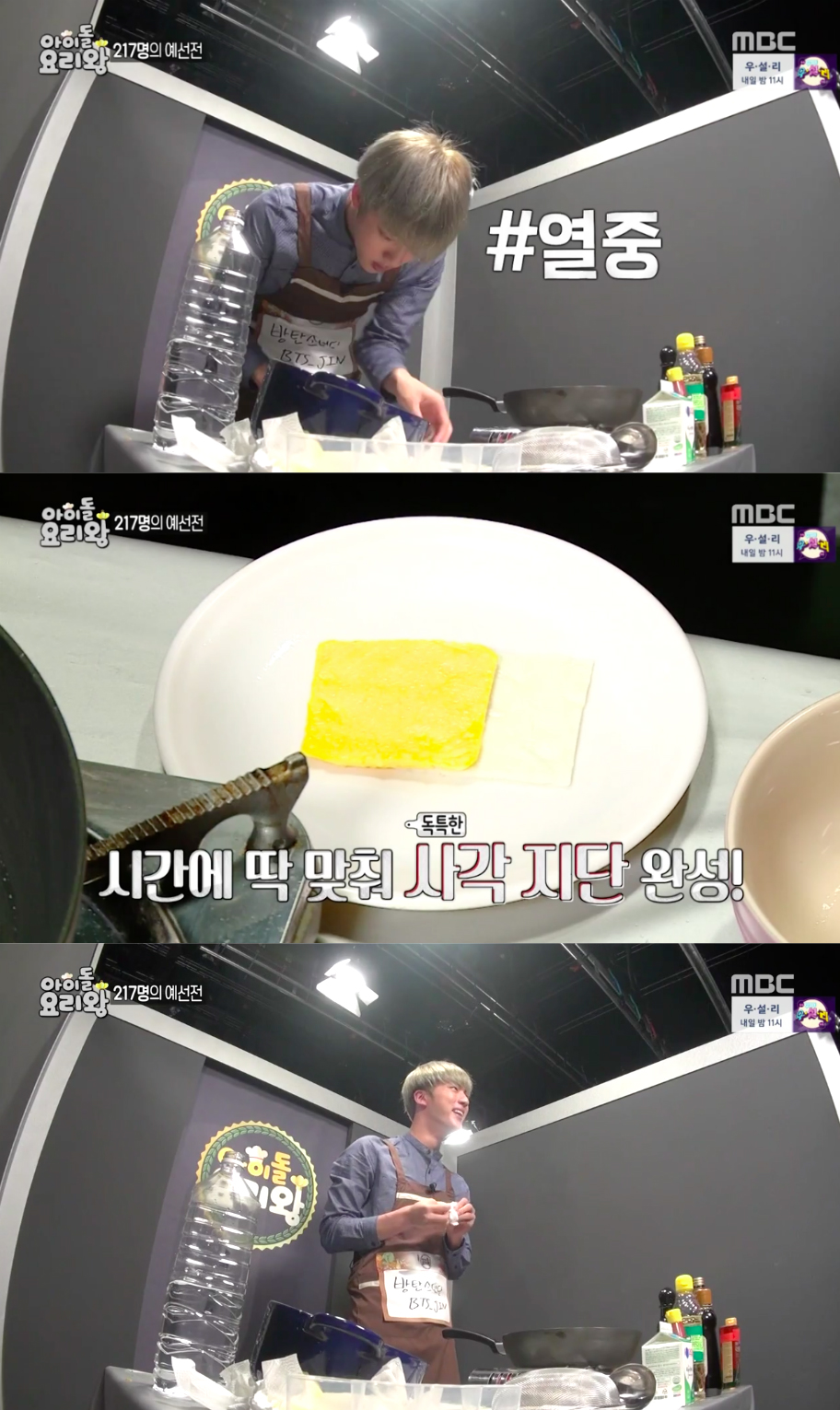 When asked by the host to give his own review of his performance, he says, “I couldn’t do well because of the unfamiliar environment, but I put my love into it!” and gives a kiss to the camera. 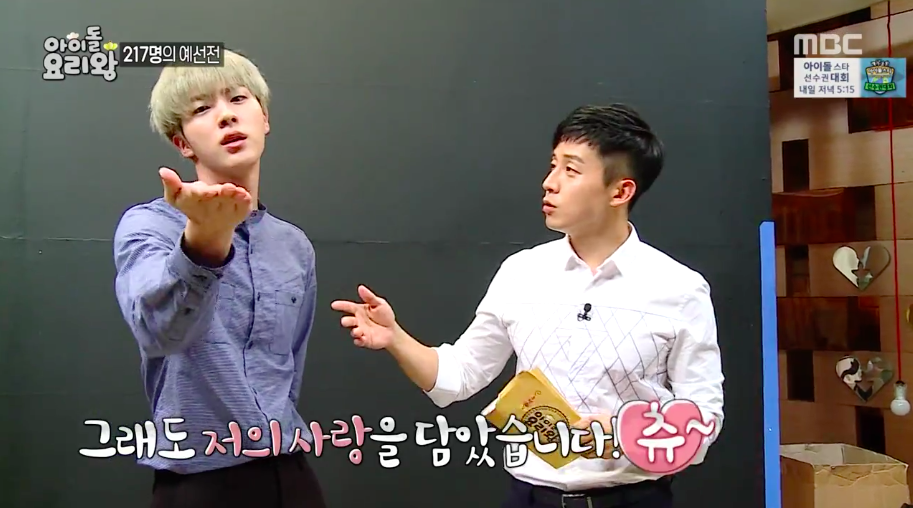 Jin is told to send a message to judge Hong Suk Chun, and so Jin says, “I love you!” and gives another kiss to the camera. “You were the best!” says Hong Suk Chun, totally won over by Jin.

When going through all the plated dishes, Hong Suk Chun points out that Kwanghee’s garnish looks great too. He also tries to keep EXO member Suho’s hilarious egg mess in the running just because he’s Suho, but gets called out for it by the host. 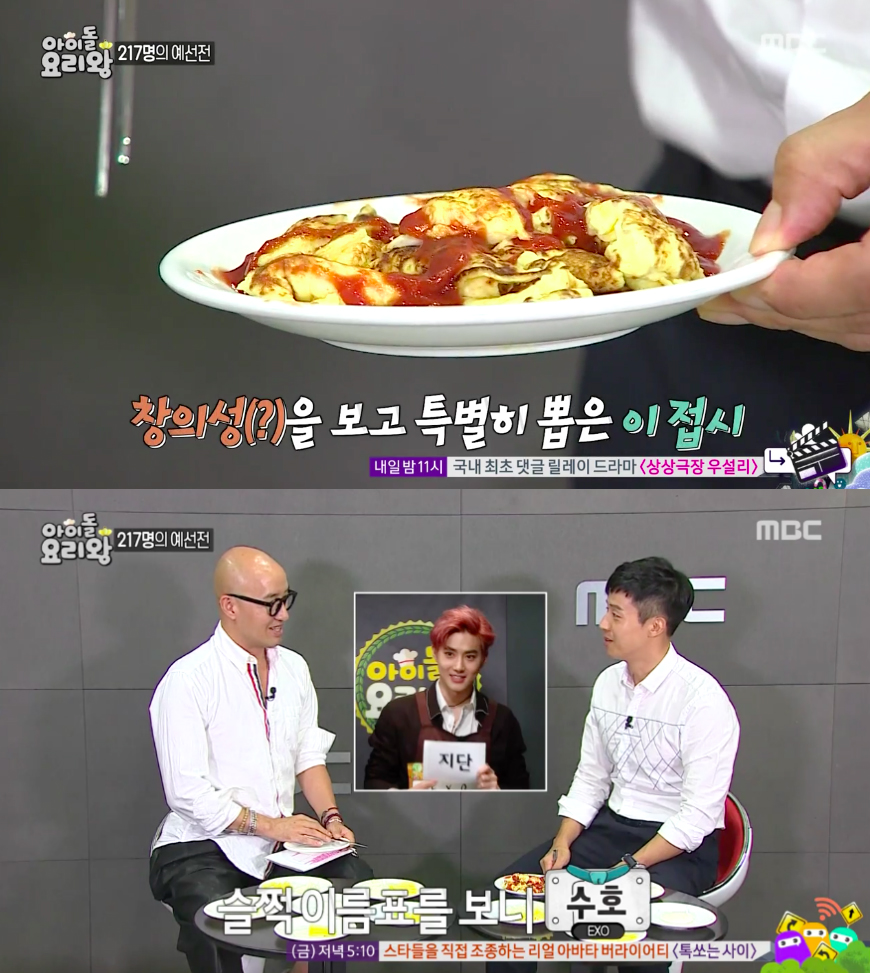 Watch the full episode of the “Idol Chef King” preliminaries to see who else succeeded in impressing with their skills!