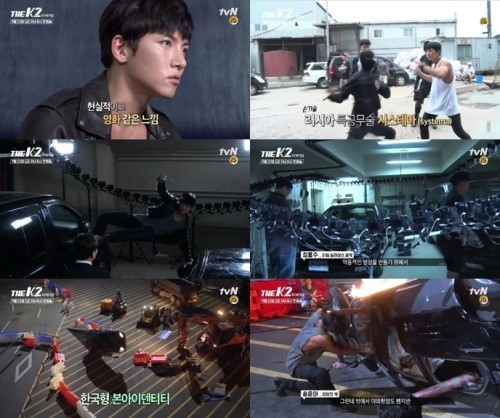 tvN’s upcoming drama, “The K2,” is branding itself as a new “blockbuster drama.”

Ji Chang Wook plays the mercenary-turned-bodyguard Kim Je Ha and the drama looks like it will deliver the action-packed scenes you might expect from such a career. Fight scenes were choreographed using the Russian combat martial art systema, the Korean self-defense martial art taekwondo, the Japanese martial art aikido, and Brazilian jiu-jitsu.

Some stills released by the drama also hint at suspenseful car chase scenes and explosions, just like in a blockbuster action movie. The drama will also feature the first Korean use of the technique “time slice photography” (e.g. as seen in “The Matrix”).

The drama begins broadcasting on September 23. Watch the teasers here!