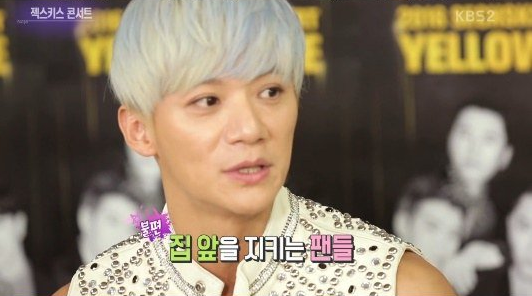 On September 18, KBS 2TV’s “Entertainment Weekly” posted an official apology on their homepage regarding a mistake in their interview with Sechs Kies.

The episode in question, which aired on September 17, featured an interview between a reporter and the veteran idol group. During the episode, Lee Jae Jin talked about sasaeng fans, saying, “When our group disbanded, I lived by myself, but my fans found out where I lived. I couldn’t go outside, so I had to report them to the police.”

He added, “I felt sorry to them at the time. But I still don’t want people to know where I live. Please don’t come.”

At this point, the reporter said, “His father is a police officer, so he’ll arrest you.” However, Lee Jae Jin’s father passed away in 2006.

In their apology statement, the production staff said, “With regards to the interview with Sechs Kies in yesterday’s broadcast, something was said in the script that did not match the real-life situation. This is entirely the production staff’s fault. The scriptwriter had made an error with regards to Lee Jae Jin’s family situation and as we rushed preparations for the live broadcast, we were unable to check the information properly. The reporter merely read the script that was given to him. We did not intend to make light of Lee Jae Jin’s father in any way, and we apologize for making many people uncomfortable with our error.”

They continued, “We also apologize to the many Sechs Kies fans who were looking forward to the interview, as well as Lee Jae Jin and his family whom we have unintentionally hurt. We will be more careful in the future to avoid these kinds of mistakes.”