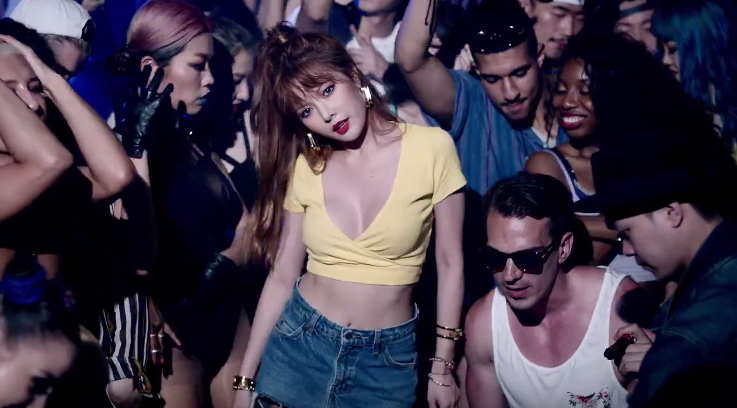 K-pop is generally recognized as tamer or less provocative than other types of pop music. However, it is no longer unusual to see Korean musicians producing more suggestive material as K-pop becomes recognized worldwide. It’s always great to see artists changing the music industry. Here are just a few of our favorite “sexy” music videos!

Warning: These music videos all contain sexual content and range from 12+ to 19+ in rating.

As is characteristic of JYP Entertainment idols, Fei has recently impressed with her confidence in her solo release “Fantasy.” We can make a pretty good guess about what type of fantasy she is referring to, and this futuristic music video mixes the virtual world with the real world perfectly.

U-KISS has never been afraid of the sexy concept, which they proved once again when “Quit Playing” came out. While most K-pop artists use symbolism and innuendoes to turn up the heat, these men cut to the chase and burn down the entire building while they are at it!

When the news hit that Mino had to reshoot his music video because it wasn’t sexy enough, fans could be sure they were in for a treat! Even though “Body” was filmed twice and Mino is still a rookie, he does not disappoint with this sultry solo release. Of course, we are still hoping he releases the 19+ version in the future though!

Anyone that has seen Jonghyun performing onstage knows he can give a thrilling and hot show, so it is almost expected that one of his solo releases is tantalizing too. His song “Crazy” is tastefully done, and leaves fans excited for the next glimpse of his sculpted abs!

As the group most famous for not holding anything back in terms of exposure, it is only fair to include STELLAR’s suggestive release, “Vibrato.” Their use of imagery is completely out of this world!

The members of MYNAME surprised with their sudden charismatic sexiness when “Just Tell Me” came out. We had never seen this side of them before, so it quickly became a pleasant surprise for the fans that survived their steamy release!

HyunA is the goddess of the sexy concept, and she has once again slayed with her newest hot music video “How’s This?” A sizzling dance track, it showcases the talent of over a hundred professional dancers as they party the night away.

Listeners should not be fooled by Jay Park’s baby face! His most recent music video, “Aquaman,” may not seem very suggestive at first, but after a closer listen, this track’s (completely English) lyrics quickly give way to the real meaning!

Sexiness is not always used to win over fans, and Gain’s controversial song “Fxxk U” is the perfect example. The Brown Eyed Girls’ singer uses graphic imagery and vulgarity to bring attention to the problem of relationship abuse. It is encouraging to see that as Korean artists explore edgy concepts, some choose to use it to spread awareness of important issues that are all too often buried by society.

The unbelievably attractive boys of History came back with “Queen,” where they sing the praises of someone that has caught their attention. This sensual and addictive music video is guaranteed to impress with its upbeat tempo and mind-boggling visuals.

Which sexy K-pop music video was your favorite? Let us know in the comments!