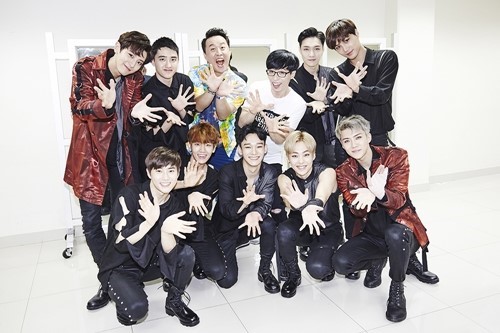 They don’t call him “God Yoo” for nothing!

After premiering the performance at their concert in Thailand on September 11, EXO sat down to talk about the immense success of “Dancing King,” their collaboration with variety star Yoo Jae Suk. The song topped seven music charts in Korea, including Genie, Naver Music, Olleh Music, Mnet Music, Soribada, Bugs, and Monkey3.

The song is the 32nd track released through SM STATION and is a result of a collaboration between the group and “Infinite Challenge,” which premiered the music video on September 17.

EXO spared no compliments as they talked about their dancing partner, saying, “Yoo Jae Suk is busier than us but he didn’t rest at all day or night and practiced every day, just so that he can show a perfect performance. We were so touched and felt such respect for him.”

They continued, “We want to thank all the people who showed interest and love to our collaboration. We also want to thank ‘Infinite Challenge’ and Yoo Jae Suk who taught us yet another lesson. It was a time of great learning.”

EXO also talked about the song’s great success on the charts, saying, “We were so happy to see the love the ‘Dancing King’ received. It was challenging for us because we were preparing for the concert while also promoting our repackaged album and preparing for ‘Dancing King.’ We really think that this was all due to Yoo Jae Suk sunbaenim.”

EXO also revealed that they plan on donating all of the proceeds of the song to charity.

Watch this episode of “Infinite Challenge” below.