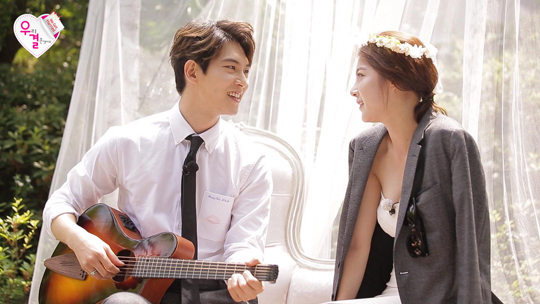 Former “We Got Married” couple CNBLUE’s Lee Jong Hyun and Gong Seung Yeon will be reuniting in a new drama!

On September 20, it was revealed that the pair have been cast as the leads for “My Only Love Song.” The drama will tell the story of haughty top star Song Su Jeong (Gong Seung Yeon), who believes money determines rankings for people and love, meeting money-driven On Dal (Lee Jong Hyun) through a time slip.

Lee Jong Hyun’s character is described as willing to go through water and fire in order to make money. Despite his ambitions for money, he is sweet and caring to those who have it tougher than him. In the drama, he has a fateful meeting with Gong Seung Yeon’s top star character who experiences a time slip and travels to the past.

The CNBLUE member last acted in KBS2’s “Orange Marmalade” and is making a drama comeback in about a year. As for Gong Seung Yeon, she recently acted in “Master: God of Noodles” and is currently an MC for “Music Bank.”

Gong Seung Yeon and Lee Jong Hyun were well-loved as a virtual married couple on “We Got Married” with many viewers opposing their exit from the show after appearing for five months.

Gong Seung Yeon
Lee Jong Hyun
We Got Married
My Only Love Song
How does this article make you feel?