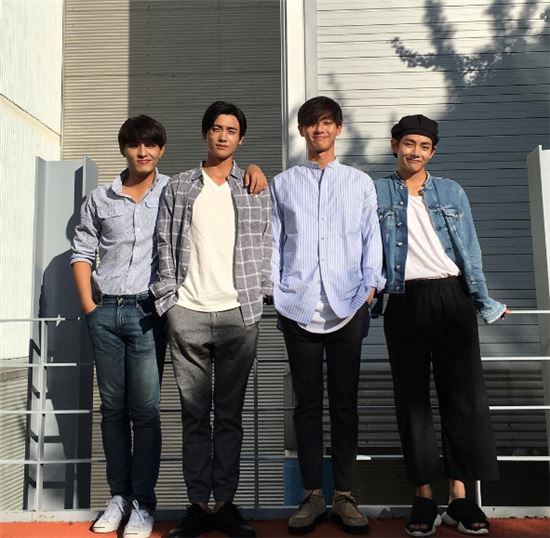 On September 20, Park Seo Joon treated fans to a handsome snapshot of him and some of his co-stars from his upcoming drama “Hwarang: The Beginning.”

The photo shows Do Ji Han, Park Hyung Sik, Park Seo Joon, and Kim Taehyung (BTS’s V) standing and smiling. Along with the snapshot, Park Seo Joon wrote, “Finished poster filming. Now only the press conference is left. It’s too bad Minho and Yoon Woo had to leave first because of schedules.”

Looks like the co-stars are quite close and friendly!

KBS2’s highly anticipated “Hwarang: The Beginning” tells the story of the Hwarangs’s passion, love, and growth in the capital of Shilla 1,500 years ago. The drama boasts a star-studded cast including Park Seo Joon, Go Ara, Park Hyung Sik, SHINee’s Minho, BTS’s V (Kim Taehyung), Do Ji Han, Jo Yoon Woo, and more. The first episode of the youth sageuk is scheduled to air on December 19.