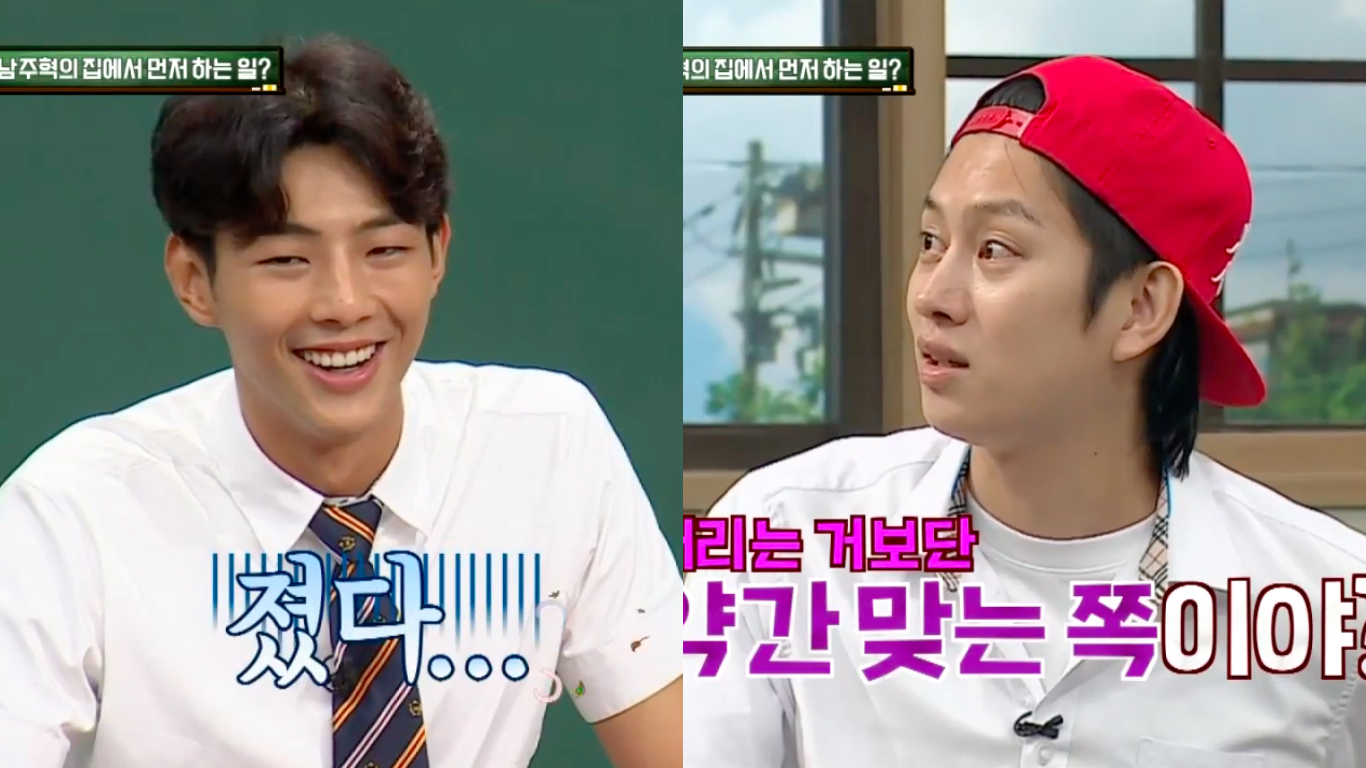 Ji Soo probably regrets ever bringing up his BFF Nam Joo Hyuk on “Ask Us Anything”!

Ji Soo appears on September 24’s episode of the show as a guest, and quizzes the cast members with questions about himself. One of his questions is, “What is the first thing I do when I get to my friend Nam Joo Hyuk’s house?” 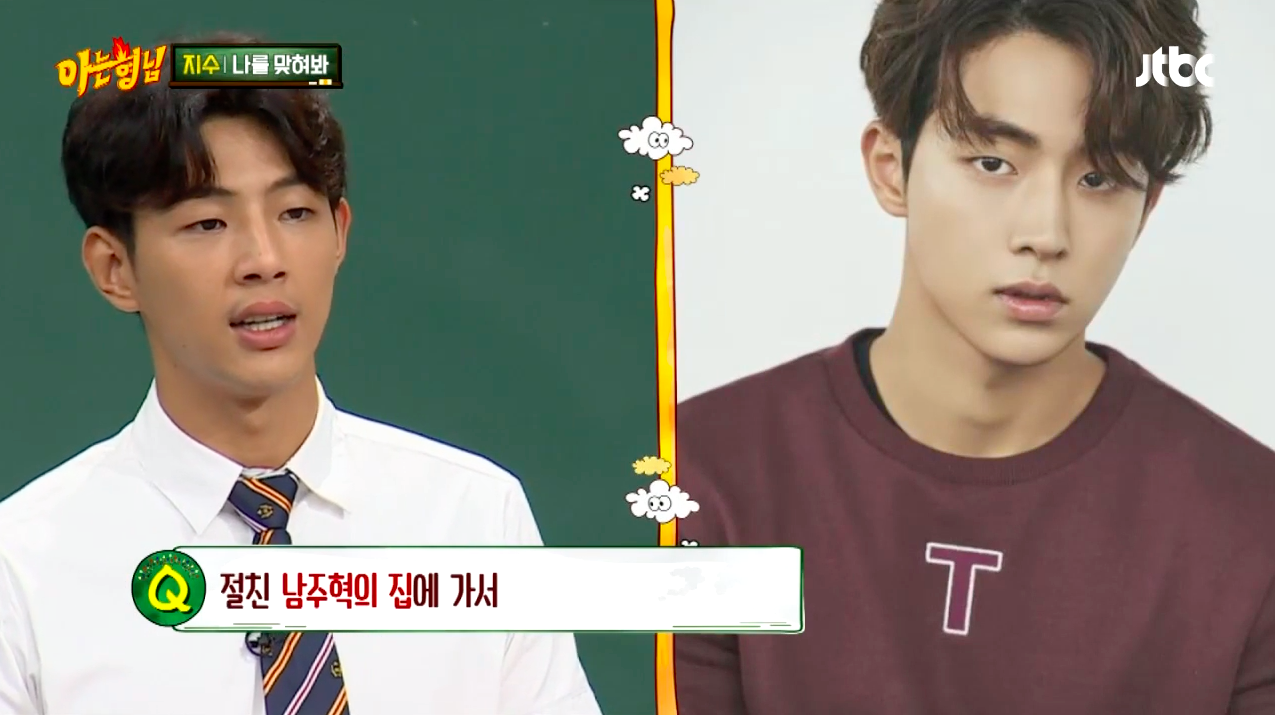 Kim Heechul guesses going to the bathroom, and Lee Soo Geun thinks it might be looking for his jewelry. Seo Jang Hoon guesses, “You take off all your clothes!” but they still haven’t got it yet.

Kim Heechul then throws out, “You lie down on his bed!” Ji Soo is surprised, and admits that he’s right, which shocks Kim Heechul. 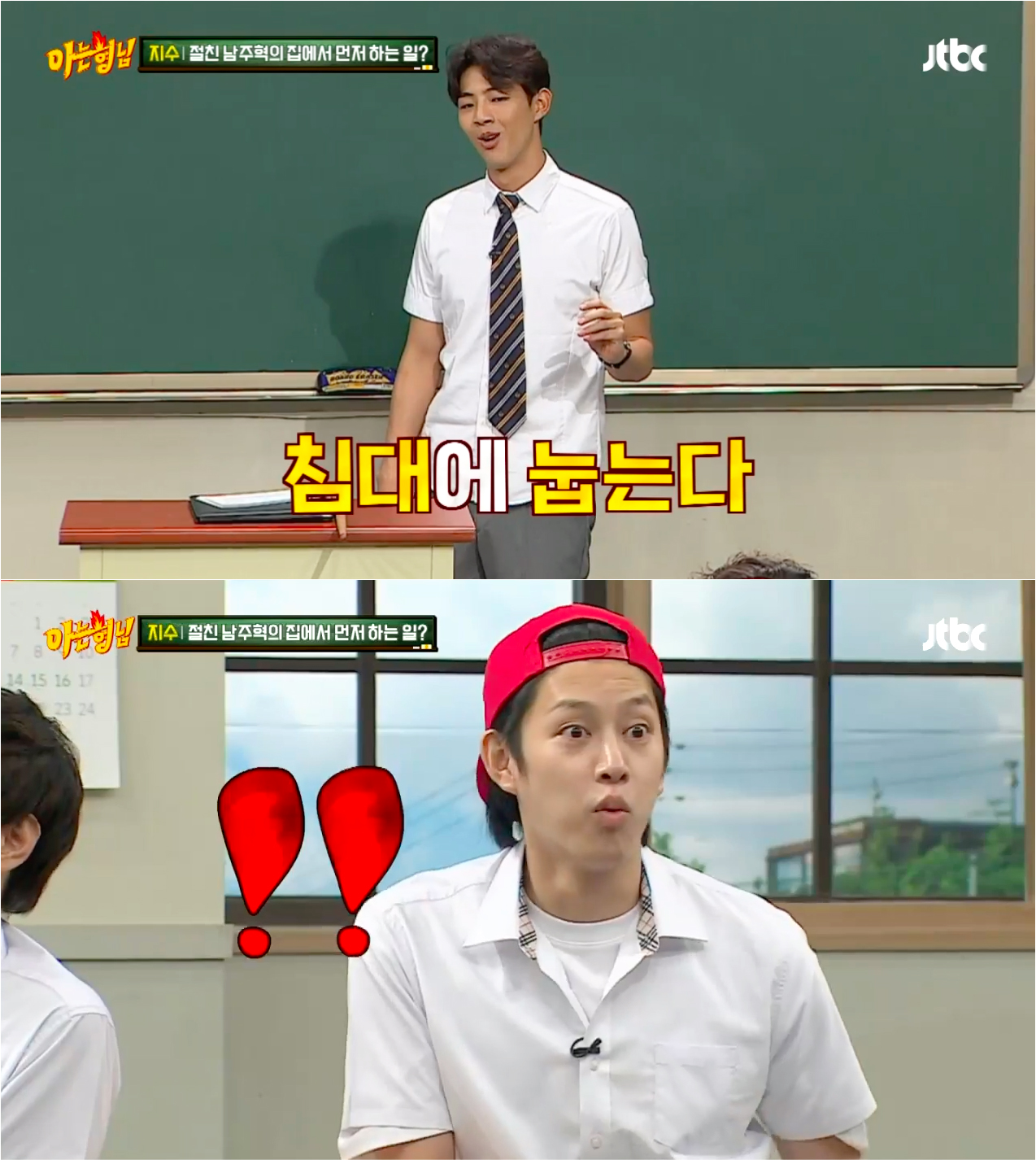 The other cast members laugh and wonder if they shouldn’t keep talking about it to make sure there aren’t any misunderstandings about what Ji Soo means. However, Kim Heechul and Kang Ho Dong keep saying they should just stop there, with Kim Heechul pretending that he’s worried there will be lots of articles about this otherwise, while Ji Soo looks like he’s totally speechless. 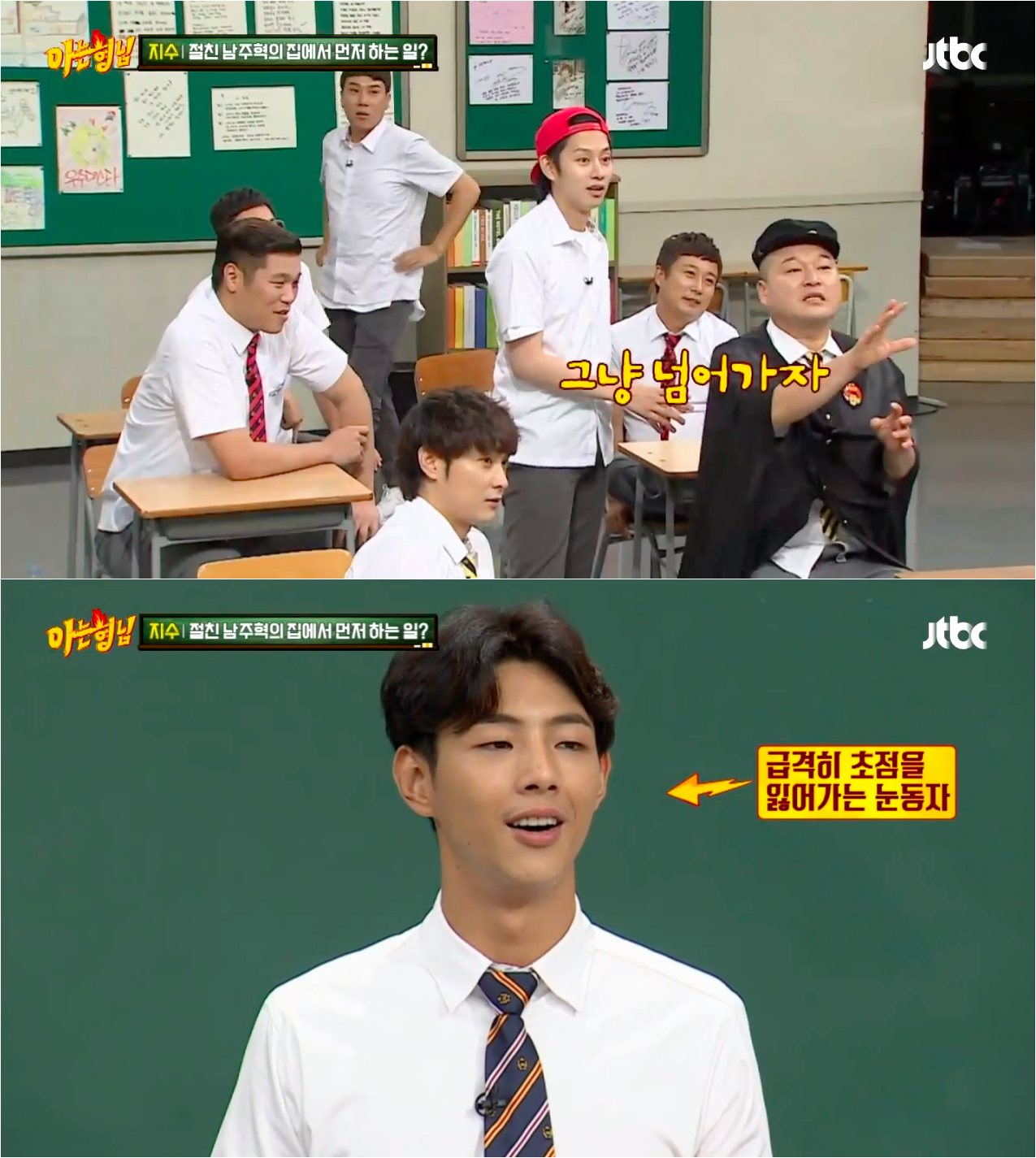 Kim Heechul jokes that he’s concerned because earlier Ji Soo seemed to have good chemistry with Min Kyung Hoon, and also said that he liked Kim Heechul. “So is that why you said you’re not dating any women?” asks Seo Jang Hoon.

Ji Soo stutters a bit as he asks, “Should I explain?” 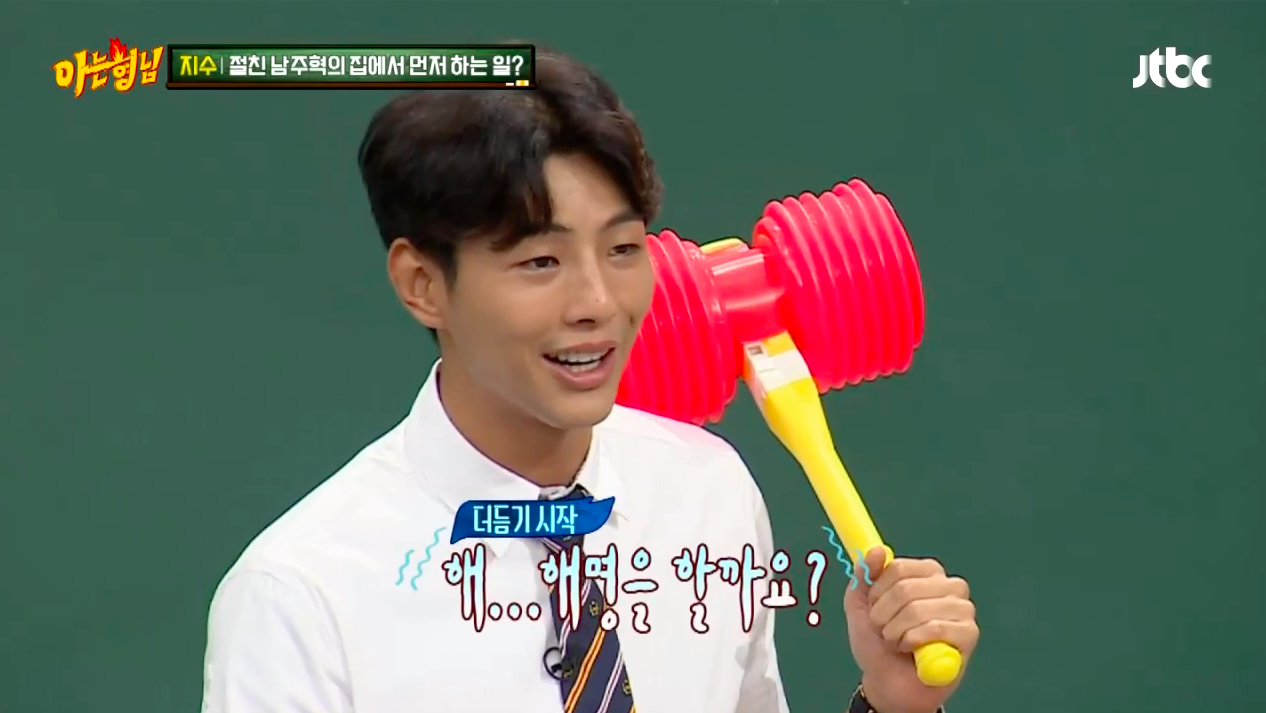 They don’t give him the chance, and Kang Ho Dong rushes in to tell the others and the audience in the studio, “Don’t tell anyone about this! Let’s keep it a secret!”

Ji Soo jumps in to say, “If I try to explain more clearly…” but Kang Ho Dong and Kim Heechul protest and tell him not to. Ji Soo laughs and says, “Please, I really want to explain!” 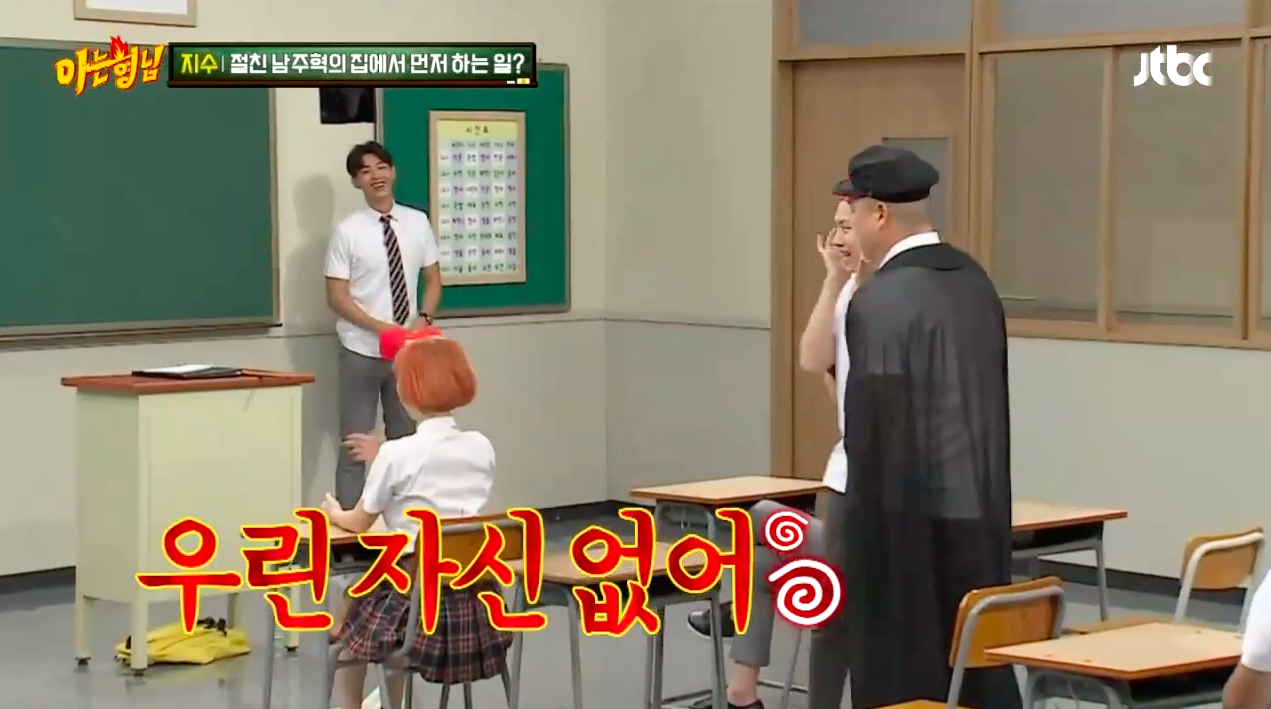 “Can’t someone lie down at their friend’s house?” Ji Soo then asks. Lee Soo Geun replies, “Don’t get embarrassed about it. At your age, you can do that kind of thing.” 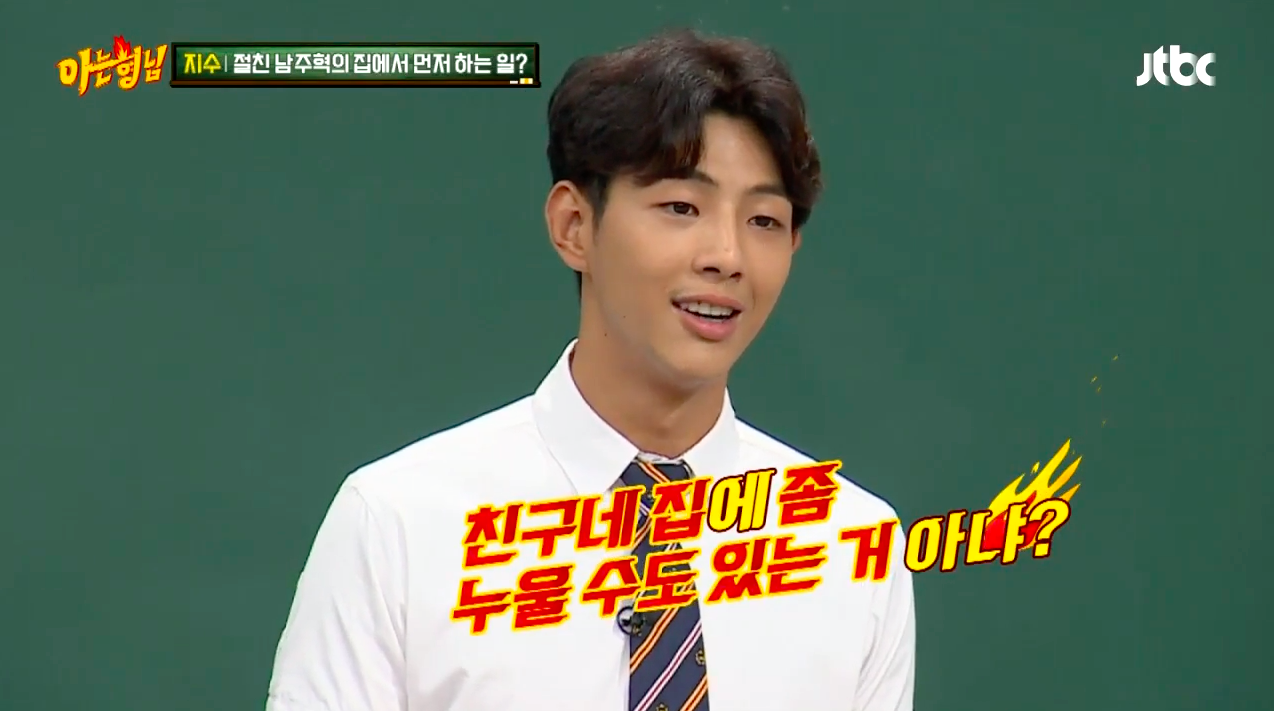 When asked what they do after they lie down, Ji Soo says, “After we lie down, we watch television and talk –” but Seo Jang Hoon jumps in to ask him to clarify that they’re doing this while lying down in bed together, which makes Ji Soo crack up.

Ji Soo tries to add that the bed is very big, but everyone’s busy watching Kim Heechul pretending to reenact Ji Soo and Nam Joo Hyuk talking in bed together. He sits on Min Kyung Hoon’s desk and pets his hair, which leads Lee Soo Geun to joke that Kim Heechul seems too good at that. “It’s okay,” says Kim Heechul to Ji Soo. “It’s what you like.” 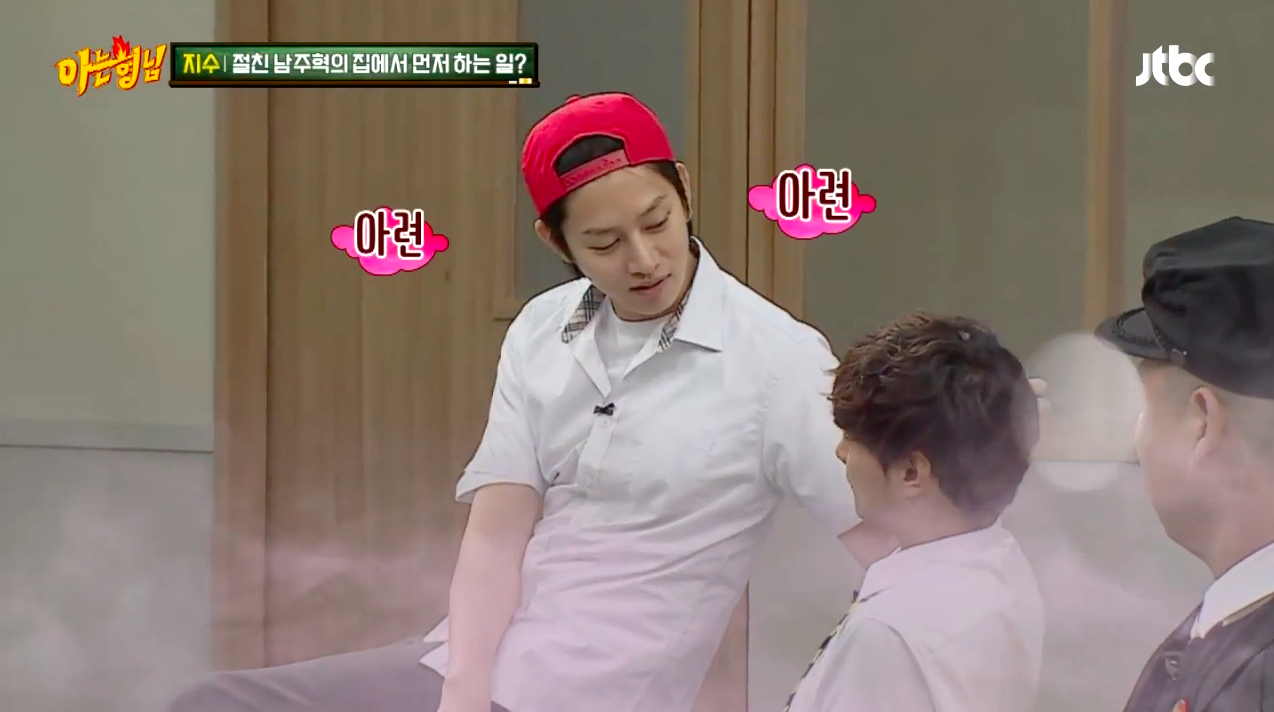 “No!” protests Ji Soo with a laugh, but he hits his toy hammer against the lectern. Lee Soo Geun points out that if he’s angry, he’s allowed to hit them with the toy hammer. Ji Soo says he understands, but just hangs his head and doesn’t move to hit them. 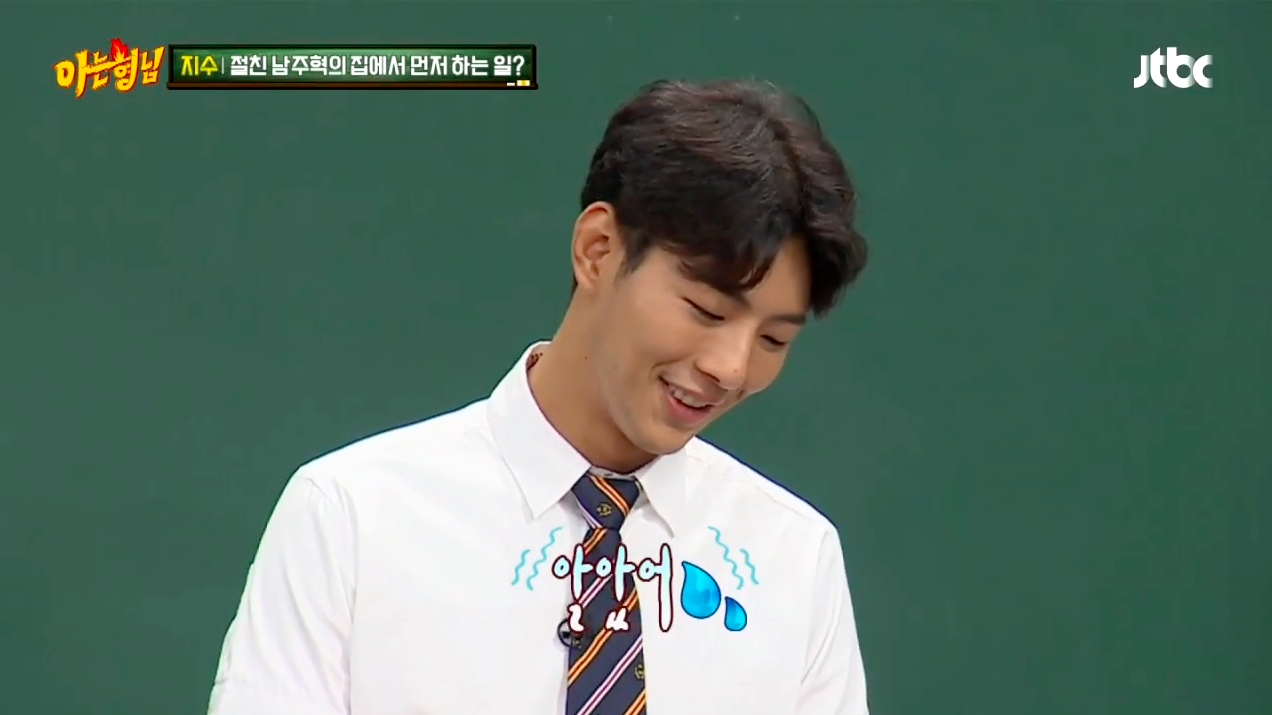 “Ah, you prefer being the one who gets hit instead of the one who’s hitting?” throws out Kim Heechul. 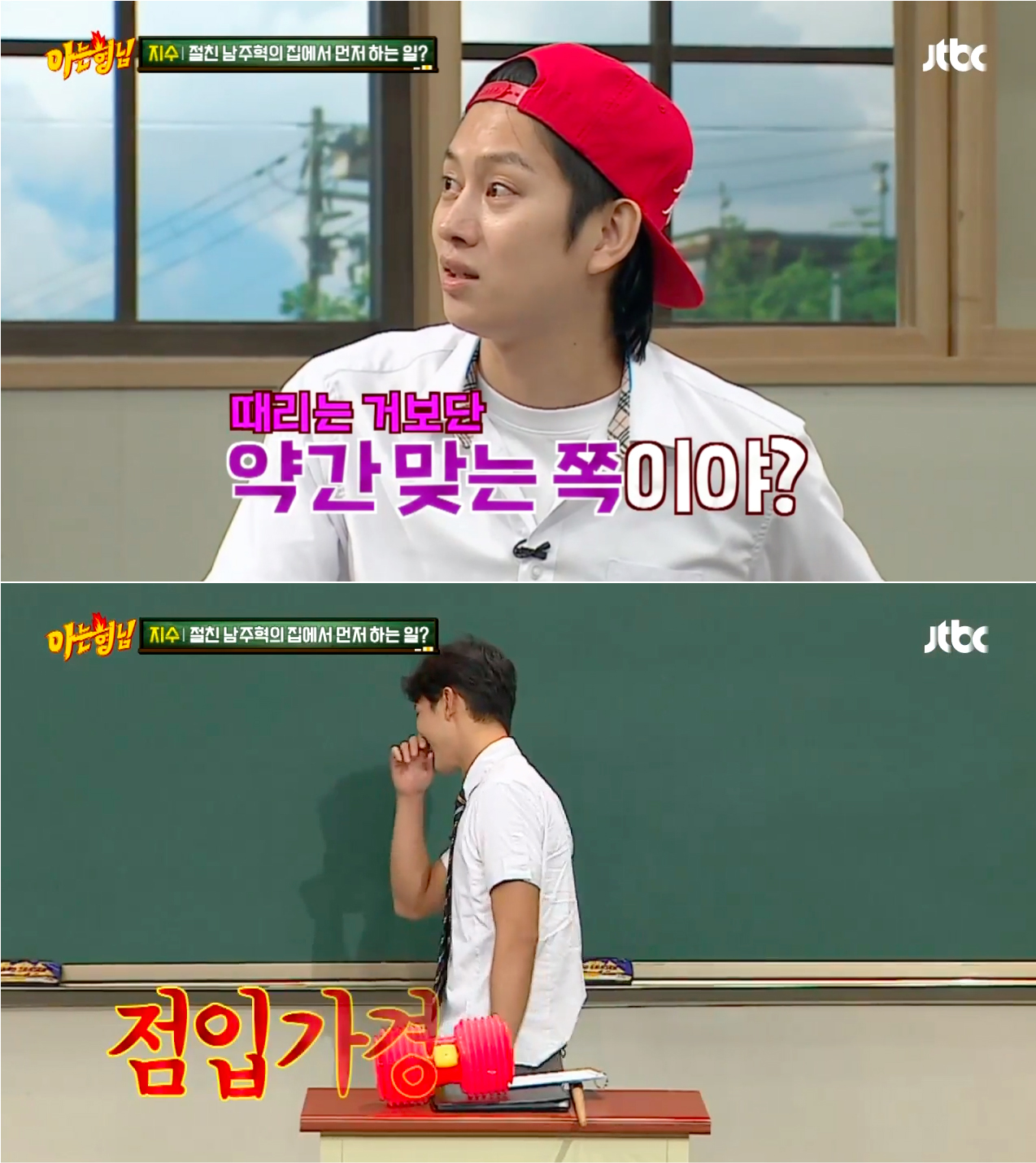 Seo Jang Hoon then points out that Nam Joo Hyuk and Ji Soo look similar, and Kang Ho Dong says with the tone of someone making a wise comment, “Two people who love each other start to resemble one another.” 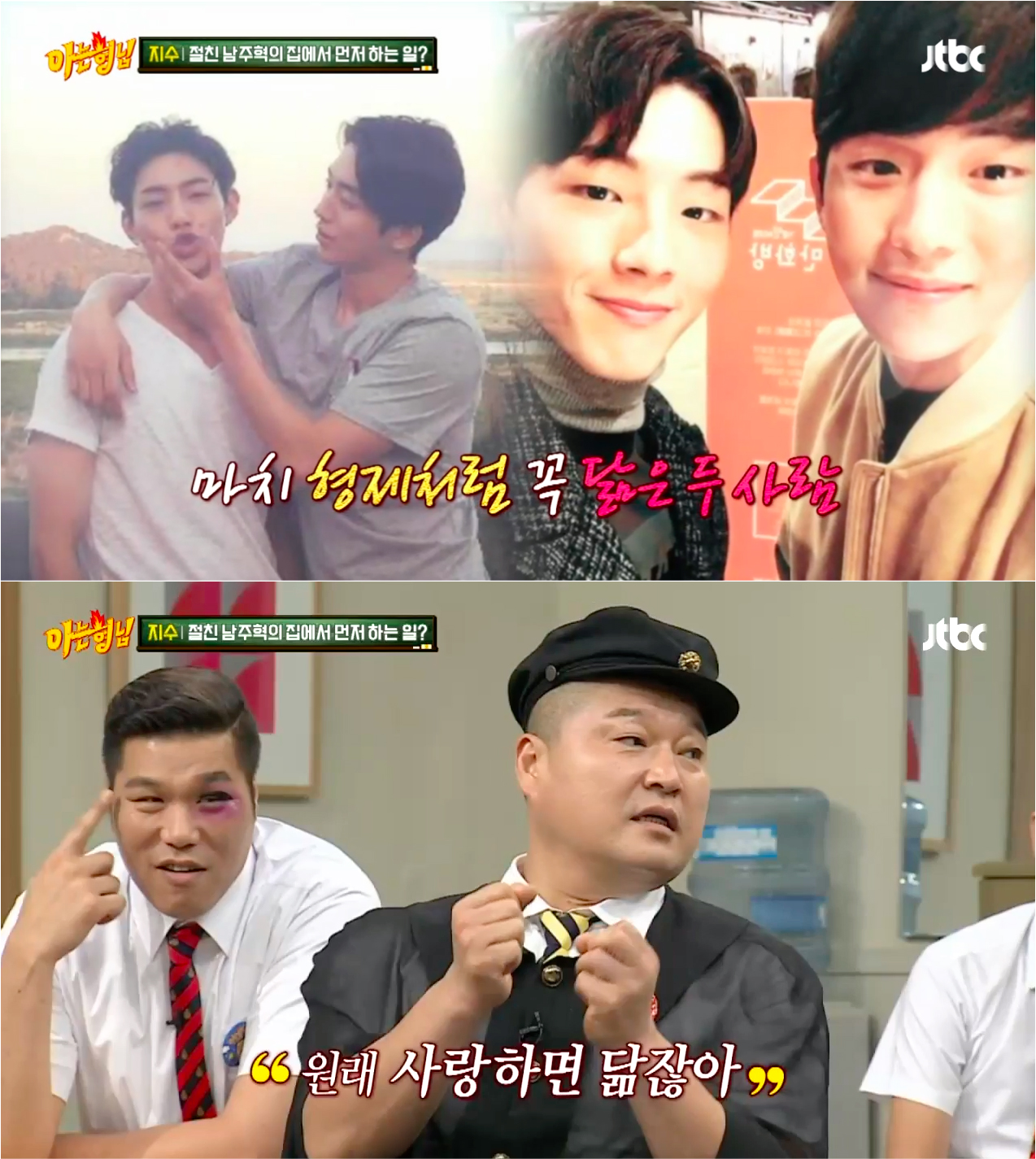 Ji Soo tries to wrap things up by saying, “I really like women,” but the guys aren’t going to let him get the last word. Lee Soo Geun says to him, “Do you keep saying that because you’re worried? I hope you won’t take what we’ve said as just a joke.” Ji Soo cracks up again at this, totally at a loss. 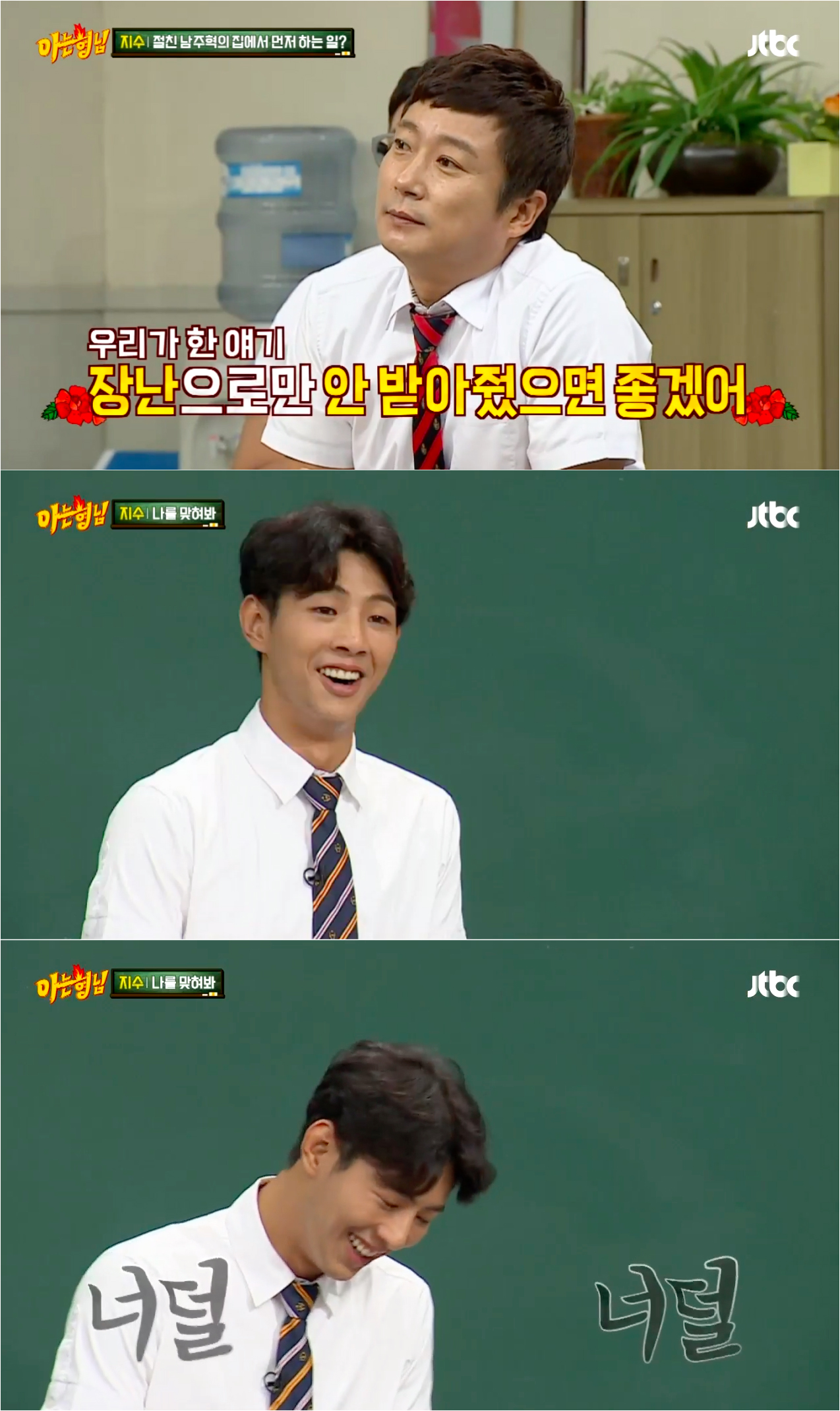 They then decide to move on to Ji Soo’s next quiz question, which is, “What is it that you can never beat me at, even if all of you worked together?”

The answer turns out to be judo, but Kim Heechul first replies, “Loving Nam Joo Hyuk.” This is the final straw for Ji Soo, who laughs and finally runs over to hit Kim Heechul on the shoulder with his toy hammer. “Thanks,” says Kim Heechul. “I like being hit.” Ji Soo laughs again and says, “I liked hitting you.”

Ji Soo and Nam Joo Hyuk are currently starring together as princes in the SBS drama “Scarlet Heart: Goryeo,” while Ji Soo is also appearing in the drama “Fantastic.” Ji Soo recently had to receive emergency surgery for osteomyelitis (inflammation of bone or bone marrow, usually due to infection), but is said to be recovering well.