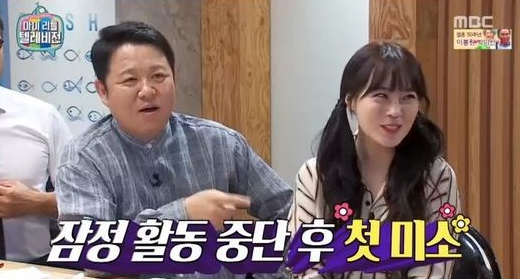 Heo Young Ji Reiterates That KARA Has Not Disbanded

Heo Young Ji appeared as a guest on MBC’s “My Little Television” on September 24, where she again asserted that KARA has not disbanded.

She had previously mentioned this on SBS Power FM’s “Kim Chang Ryul’s Old School,” where she revealed that she still keeps in contact with the members and that the group has not disbanded.

The topic was mentioned once more during a segment where Young Ji ate sushi while smiling. Watching her expressions, Kim Gura made a comment, saying, “It’s the first time I’ve seen this kind of smile since KARA disbanded.” However, Young Ji quickly corrected him, saying, “KARA hasn’t disbanded.”

Slightly flustered by the correction, Kim Gura fixed his statement, saying, “You haven’t smiled like this since KARA slowly stopped their promotional activities.”

Heo Young Ji
My Little Television
KARA
Kim Gura
How does this article make you feel?