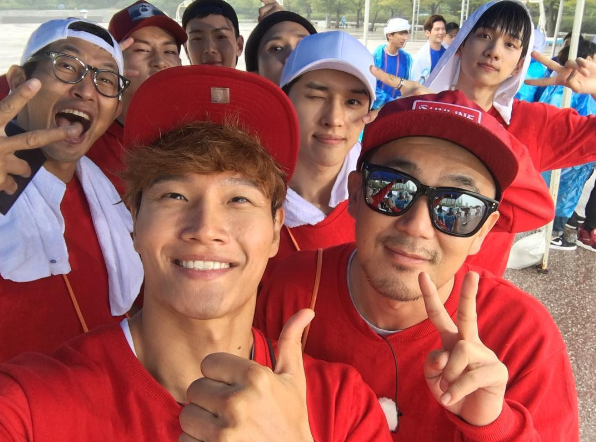 It looks like an upcoming episode of “Running Man” is going to be epic!

The “Running Man” cast recently filmed a race near the Han River in Seoul on September 27 against over one hundred stars and idols. The main guests are actors Jo Jae Hyun and Chae Soo Bin, with a hundred idols, broadcasters, and actors also taking part in the massive race. Groups that were have been spotted in photos on social media include VIXX, MONSTA X, DJ DOC, KNK, MADTOWN, Snuper, BIGSTAR, gugudan, BESTie, Topp Dogg, and more!

The opponents were split up into teams and each assigned a cast member to try to take down. It’s said that since there were so many people, they had the stars film themselves instead of using a camera person for each contestant.

KNK shared some photos from the filming via Instagram, with Seungjoon first posting a picture taken by MONSTA X’s Minhyuk and asking followers to let them know if they see Haha.

KNK then shared a picture with Yoo Jae Suk with the caption, “We wrapped up the ‘Running Man’ filming well without anyone getting hurt~~ Thank you to Yoo Jae Suk for taking good care of us.”

Ji Suk Jin also shared a photo with members of KNK and BESTie, writing as the caption, “You worked hard today in all of the rain!” and adds the hashtag, “Idols never smile.” KNK shared the photo to their own Instagram with the caption, “We’ll smile starting next time, Ji Suk Jin!”

BESTie’s member Dahye also shared a shot of the group, as well as of herself with Yoo Jae Suk to her own Instagram.

Kim Jong Kook uploaded a photo from filming along with DJ DOC and members of VIXX and MONSTA X. “The rain made it tough to film but we got it done!” he writes in English as the caption.

DJ DOC’s Kim Chang Ryul also shared a photo of himself with some of the guys of VIXX and MONSTA X, and asked followers to let him know if they see Kim Jong Kook.

The guys of MADTOWN shared their own snapshot with Yoo Jae Suk post-filming as well.

Broadcaster Kim Yoon Sang posted a photo to his own Instagram that also shows Lee Kwang Soo with members of Snuper, BIGSTAR, and gugudan. He writes as the caption, “Expectation: one second of screen time.”

Topp Dogg’s B-Joo also shared a collage of photos from the shoot.

This episode of “Running Man” is expected to air in October. Are you excited?